Books on a Famous House, a Powerful President & an Aspiring Candidate

An election year as exciting as this one should inspire some interest not only in the candidates but also their presidential predecessors and even the house the winner gets to live in. In The White House: A Pop-Up of Our Nation’s Home (Scholastic; $29.99; ages 6+), master paper engineer Robert Sabuda provides a layout that candidates’ advisers can use to start choosing decor, just in case. In addition to the striking visuals of the East Room reception area; the Lincoln Bedroom, plus its previous incarnation as the Lincoln Study; and the Oval Office, the book offers historical highlights of the building. A poem by Richard Watson Gilder expresses how the president and White House represent the United States to people of other nations. 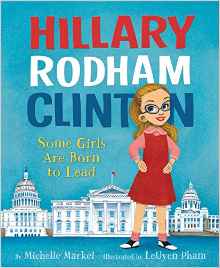 No other candidate can match the outpouring of books about the previous White House resident now running for president. Michelle Markel’s picture book Hillary Rodham Clinton: Some Girls are Born to Lead (HarperCollins; $17.99; ages 4-8) contains illustrations by LeUyen Pham that trace Hillary beginning in her childhood when she first showed the spark that led her to become Secretary of State and visit 112 countries. It also follows her evolution from a nerdy student with thick glasses to a leader, all while she raised a family and supported her husband Bill’s career that segued into her own. 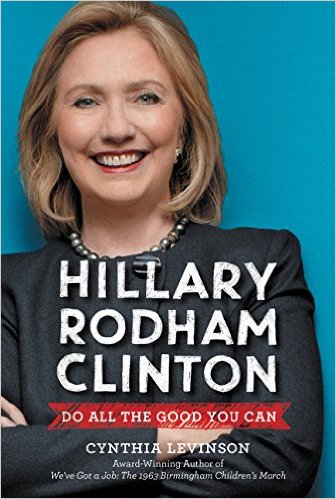 The book Hillary Rodham Clinton: Do All the Good You Can (HarperCollins; $16.99; ages 8-12) focuses on Hillary as career woman but does not overlook her growing up as a “tomboy” in a white middle-class neighborhood. The emphasis on policy tells a great deal about the 1990s and the issues that faced the country Clinton encountered at that time. Engaging as a biography, the book also deals with more recent events that still affect us today, providing a lesson on how different life can be depending on who leads the country.

One president who made a tremendous difference to 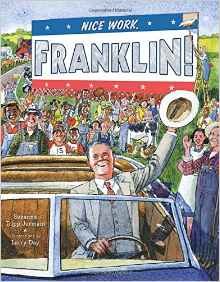 life in the United States was Franklin Roosevelt, as described in historical context by Suzanne Tripp Jurmaine and ebulliently illustrated by Larry Day in Nice Work, Franklin! (Dial; $17.99; ages 5-9). The illustrator captures the sense of issues like unemployment and getting the country back to work, with drawings crowded with people waiting for the president to do something for them. The author portrays the president as a can-do politician who followed his cousin Teddy Roosevelt’s example but had his own problems, starting with polio that struck him in 1921 at age 39. Facing the country’s malaise from the Great Depression that began in 1929, Franklin’s inspiring story again emphasizes that the whole country, if not the world, depends so much on the right person becoming president, especially in turbulent times.