Black History Month is not just an annual reminder of an important part of American history. It also tracks how black history has been portrayed and celebrated.

Few books match the depth and nuance of Linda Barrett Osborne’s  Miles to Go for Freedom: Segregation & Civil Rights in the Jim Crow Years (Abrams, $24.95, ages 10 & up). Focusing on the end of the 19th century to the Civil Rights era 50 years ago, the book shows how the South developed the segregation laws known as Jim Crow in defiance of the Constitution but in conformity with the separate-but-equal decision in Plessy v. Ferguson, an 1896 Supreme Court case.

The author describes the experience of segregation, the laws that supported it and the social distortions it engendered. At the intersection of law and personal experience, the author asks, “How do you fight a system like segregation, which affects every part of your life and makes you feel bad about who you are no matter how well you act?”

Another Supreme Court decision, in Brown v. Board of Education, overturned segregation in 1954, and Jim Crow officially ended. But it took many years for the changes to seep through society.

The book chronicles the achievements of people despite segregation’s pervasive influence. Most were unsung heroes who need to be remembered because once circumstances changed, it became easy to forget the Jim Crow era. 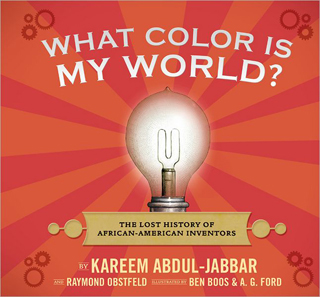 Basketball great Kareem Abdul-Jabbar, working with writer Raymond Obstfeld and illustrators Ben Boos and A.G. Ford brings a new approach to “The Lost History of African-American Inventors,” the subtitle of their picture book, What Color is My World? (Candlewick, $17.99, ages 8 & up).

The story that intersperses the biographies of high-achieving African-Americans notes that we all know about George Washington Carver, who developed the peanut as a commercial crop and was called “the black Leonardo,” after Leonardo da Vinci.

Instead, the authors concentrate on modern achievers who may be less well known but have made significant contributions. Some of them are still alive, like Dr. Henry T. Sampson, who invented the gamma electric cell, which converts radiation energy into electricity, and Dr. Mark Dean, an IBM executive who made color computer monitors possible.

Besides the clever design with flaps for matching inventors and their achievements, the book gives a contemporary spin to a standard topic that scores with much new information.