“Shotgun!” yelled the youngest of my two sons, following up quickly with, “I can see the car so I’ve got shotgun,” letting his brother know clearly that he was following the prescribed rules for calling “shotgun.” And so the day began, Friday, dad and sons' day, a day filled with activities and fun.

The idea to take off Fridays in August came to me about a month ago. Realizing I would have extra vacation days that my employer would not allow me to carry over, I decided it would be a great idea to take all of the Fridays off in August to do some things with my boys. Over the next few weeks, I’ll share with you some of our adventures and hopefully give you a taste of the activities and time shared doing things with my kids.

No better way to kick off August Fridays than to share in the time-honored ritual of the father-son(s) haircut. We hit the barbershop early Friday morning and got our hair trimmed and cleaned while we told our cutters about the dreadful Phillies game the night before. “Hamels pitched a gem and then Papelbon came in and blew it,” my exasperated oldest son said. “At least the Flyers will be starting soon.”

After being freshly groomed, the three of us headed over to the Silver Diner on Route 38 in Cherry Hill for some much-needed breakfast. This is a great diner with the old-fashioned chrome counter stools, leather booths and mini working jukebox at every table. What sets it apart is that although this is a chain diner, each one is managed to source local farm-fresh foods. The boys feasted on French toast and I gobbled up some poached eggs and bacon. Happily sated we got in the car and headed to the Adventure Aquarium on the Camden waterfront. 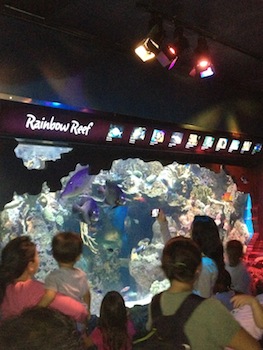 Nestled between the Battleship New Jersey and Campbell’s Field (home to the Camden Riversharks minor-league baseball club), the Adventure Aquarium provides up to a day-long set of exhibits, films and interactive activities that are amazing fun but informative as well (who says you can’t learn during summer break?). Still full from breakfast, we decided to start slowly by taking in the great cinematic feature, SpongeBob SquarePants 4-D: The Great Jelly Rescue. Breathtaking animation, wonderful effects and excellent direction made this an Oscar contender to be sure during next year’s Academy Awards, ahem. 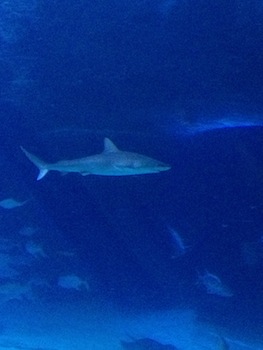 As we exited the theater, we discussed what we wanted to do next. Of course, the major exhibit going on now is Mighty Mike, the largest American alligator outside of Florida. At 14-feet long, Mighty Mike looms large not only in a kid’s imagination but in reality as well. Although we hoped Mighty Mike was hunting for prey, he was, instead, lounging comfortably on a rock inside the exhibit space. My youngest commented, “He looks like he’s not breathing.” We later found out from one of the staff members that alligators only draw a breath once every half-hour. One of the other big draws at the Aquarium is the Shark Tunnel. Guests walk through a 20-foot glass tunnel that allow them to view sandbar, nurse and hammerhead sharks from every angle. Grown-ups and kids alike expressed awe at this wonderful display.

While the sharks and the alligator draw a lot of attention, it must be said that the other exhibits are just as exciting. From the hippos to the jellyfish to the penguins, you and your kids can linger, taking in the wonders of the sea. 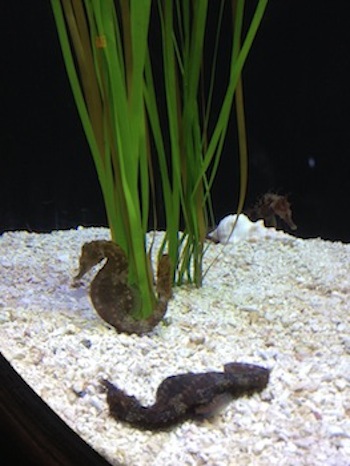 After a quick lunch of burgers, hot dogs and chicken nuggets at the Feeding Frenzy Cafe, we decided to take a walk along the waterfront. It was a beautiful sun-filled day and the walk afforded us the opportunity to talk about the aquarium, the Phillies and Flyers, as well as take in a view of the Philadelphia skyline and the Battleship New Jersey.

Our first Friday in August was a hit! I’m looking forward to the next few Fridays, having lined up some activities that will take us from the Brandywine River to home (Hint: We will be doing a project using a variety of wood and outdoor tools).

Steve Krementz works for a major software company and is a dedicated MetroKids dad.