Mankind’s highest achievements come in — and often consist of — the environments we build for ourselves.

Peter Kent’s City Across Time (Kingfisher, $16.99, ages 9-12) captures the vast progress mankind has made, as the subtitle says, “From the Stone Age to the Distant Future.” The two-page spreads show one spot as it evolves from a stone-age lake to a 21st-century green-conscious city, focused on the railway station that first popped up in the earlier 19th-century tableau.

Detailed drawings show cross-sections of offices and homes with small people in the appropriate garb for each age. This also shows the fast acceleration of change, as the middle ages gives way to the 16th century and a new scene for each succeeding century.

There is much to identify and recognize as different, both above ground and underground, with all of the accoutrements of civilization as it evolved a century or millennium at a time. 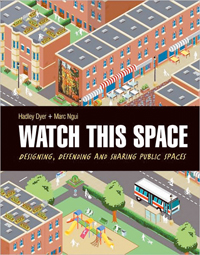 Hadley Dyer’s Watch This Space: Designing, Defending and Sharing Public Spaces (Kids Can Press, $18.95, teens) takes a similar evolving view of a space but advocates that kids help it morph from a busy intersection to a pedestrian-friendly public space.

Marc Ngui’s illustrations vary along with the text from imaginative flights of fancy and graffiti to the specifics of laid out spaces. Philadelphia’s LOVE Park comes in for particular attention, in contrast to more skateboard-friendly locations that kids might want to see designed for their own benefit.

Architecture books reflect the schizophrenic nature of the field itself. They start with the sublime of creative design and progress through the grueling effort to realize the vision in dirt, bricks, mortar and hard labor to create humankind’s evolving environment.