When their advice is on how to crash land an airplane, you can’t blame the authors for putting a disclaimer in their book that they take no responsibility for the results (though if they’re wrong, who’ll ever tell?). Anyway, The Complete Worst-Case Scenario Survival Handbook: Man Skills (Chronicle, $24.95) is the latest by Ben H. Winters and Philadelphians Joshua Piven and David Borgenicht on all kinds of dilemmas and how to handle them.

It’s a fun book for tween, teen and older guys. They may not happen to have the book with them if they’re in that plane, but it will be handy when deciding what photos and information to post on Facebook or “how to survive forgetting her birthday.” (There are four steps that amount to grovel and make it up to her.)

The book is full of interesting tidbits and details that will follow a man as he gets older and expands his interests. And not all the advice is for emergency rescues. The book also tells what signals alert the crew to a plane’s landing before the public announcements, a useful ping to listen for even when there is no emergency. It makes for fun and useful reading, whether practical or not (and for the most part, one hopes not). 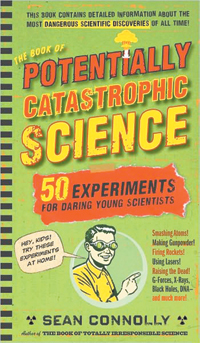 The Book of Potentially Catastrophic Science: 50 Experiments for Daring Young Scientists by Sean Connolly (Workman, $13.95) waters down experiments like how to make fireworks so that the science remains but so does the house that the experimenter might be in. Figuring out how to float an egg down a stairwell in a custom-made parachute is an experiment schools use to excite budding scientists and it is one of 50 in a book that inspires appreciation of the natural world and our capacity to change and learn from it.