Lyme disease is a well-known health problem in the U.S., with more than 20,000 new cases reported annually. A high percentage of its victims are children, says Debbie Siciliano, co-chair of Time for Lyme, Inc., a research and support group in Greenwich, CN.

“Children are par­ticularly vulnerable because they are outside a lot, especially in the early summer, when ticks are most plentiful,” Siciliano says. If they do get infected, kids can experience headaches, fatigue and flu-like symptoms, and if the disease is left untreated, they can also develop learning and behavioral problems, depression, nerve damage, memory loss and other cognitive, psychiatric and neurological problems, she adds.

Here’s what every kid and parent should know about Lyme disease:

1. Lyme disease comes from ticks. Lyme disease is caused by bacteria called borrelia burgdorferi, which are carried by parasitic (blood-sucking) black-legged ticks and deer ticks. The bacteria live inside the tick and can be transmitted when the tick attaches itself to a host and begins to suck blood.

2. Ticks are everywhere. Lyme disease is most common in the Northeast, Mid-Atlantic and Great Lakes regions. But it’s been reported all over the U.S. — and in 50 countries around the world. 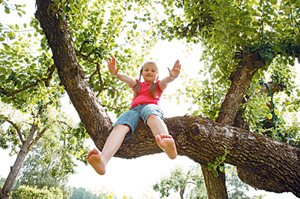 3. Ticks are tiny. These ticks are very small, especially in the first and second stage of life (larval and nymphal). At this stage, unless they’re already engorged (full of blood), they’re much smaller than the head of a pin and nearly impossible to see. Ticks are especially good at hiding in dark places like the scalp and underarms, where you’re even less likely to find them. Kids need a head-to-toe check every time they’re out in tick territory.

4.  Ticks are animal lovers. Lyme-carrying ticks are typically stowaways on deer, squirrels and mice. Ticks can also catch a ride on the family pet, so check the dog or cat every time he comes in from the outside. (Don’t mistake the ticks that transmit Lyme with the common dog tick, which is much bigger.)

5. Ticks live in plants. You’ll also find plenty of ticks in wooded areas, parks and forests as well as your own backyard and in dune grasses at the beach. Kids should stick to the trails and open areas and avoid wet, wooded areas, tall grass and leaf-littered areas.

6. Summer is tick time. The ticks that transmit Lyme disease are most active (and plentiful) in May, June and July and are most difficult to find then, as they are typically in the nymphal (baby) stage.

7.  DEET works. You wouldn’t want to bathe in the stuff, but insect repellent containing the chemical DEET is the most effective way to repel Lyme-carrying ticks. Just use it wisely: Use just enough to cover exposed skin. Apply it to your own hands and then rub them on your child (avoid his eyes and mouth). Don’t apply to a young child’s hands — little kids often put their hands in their mouths — and don’t apply to cuts or irritated skin. Click here for the Environmental Protection Agency’s fact sheet on DEET.

8. Light clothes are the right clothes. When playing outdoors in tick-prone areas, kids should wear light-colored clothing (which makes it easier to spot ticks), with long sleeves and legs. Tuck pants into socks.

The Lyme Disease Foundation is a nonprofit dedicated to finding solutions for tick-borne disorders.24-hour hotline: 800-886-LYME

The Lyme Disease Society is a Philadelphia-area volunteer advocacy and support group.

9. Timing is everything. The chances of contracting Lyme disease from an infected tick increase with the length of time it’s attached. If you find a tick, grasp it with fine-tipped tweezers and pull away from the skin without crushing its body. If you think your child was bitten by an infected tick, see your doctor right away. The sooner you begin treatment, the better. Medications may be used in the treatment of Lyme disease.

10. Rashes aren’t required. Lyme disease is associated with a red, bulls-eye-shaped rash, but many who contract the disease don’t get one. Also, not all Lyme rashes have a bulls-eye. So if your child starts to develop symptoms of a Lyme infection, see your pediatrician — rash or no rash.

Kathy Sena is a freelance writer.