Watching a movie together provides families with an entertaining shared experience and favorite scenes or ideas to discuss afterwards.

At Common Sense Media’s website, you and the kids can find DVDs to watch and topics to discuss together.

Critics differ, of course, but the list that follows includes 10 acclaimed family movies, organized by age group. Each earned approval from 90% or more of the critics surveyed at Rotten Tomatoes.

We include topics you can discuss afterward and red flags to watch out for, such as violence. It’s a good idea to preview the movie to ensure appropriateness for your family. 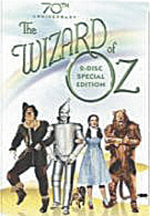 The Wizard of Oz (1939)
This beloved classic follows Dorothy and her dog Toto after a tornado whisks them away to a colorful and magical world.
Talking points: Friendship, growing up, confidence, loss.
Watch out for: The Wicked Witch and her flying monkeys might be too scary for a 5-year-old. 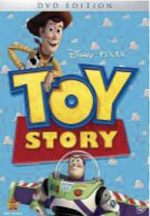 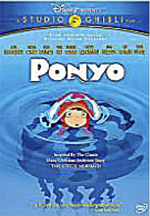 Ponyo (2008)
Internationally renowned director Hayao Miyazaki based his breathtaking animated film on Hans Christian Andersen’s fairy tale The Little Mermaid. The friendship of 5-year-old Sosuke and Ponyo, a goldfish princess, is strengthened by their quest to save the world and fulfill Ponyo’s dreams of becoming human.
Talking points: family relationships, friendship, honesty, loss.
Watch out for: mild violence and tense moments during the tsunami scenes. 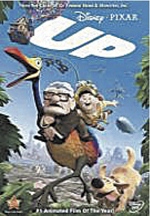 Up (2009)
In this funny, touching movie, friendship develops between 78-year-old Carl Fredricksen and 8-year-old Russell as they travel to South America in Carl’s house, lifted aloft by thousands of balloons. They encounter talking dogs, an evil villain and a rare bird named Kevin.
Talking points: friendship, loss.
Watch out for: some violence, death. 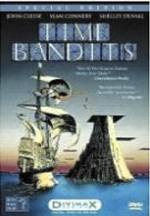 Time Bandits (1981)
This satirical sci-fi fantasy from director Terry Gilliam follows a young boy’s time-traveling adventure through history. Napoleonic times, the Middle Ages and the early 1900s are presented in a fun, accessible way.
Talking points: the meaning of satire, questioning authority, the nature of the universe and time travel. Watch out for: cartoonish violence throughout the movie. 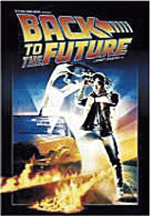 Back to the Future (1985)
In this funny sci-fi movie, Marty McFly travels back in time with the help of Doc Brown in the DeLorean time machine. He must ensure that his teenage parents meet and fall in love so that he can return to the future.
Talking points: family relationships, bullying and anti­violence.
Watch out for: violence and scariness, occasional swearing, consumerism, underage drinking and cigarette smoking. 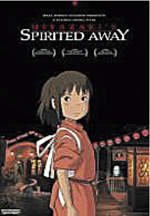 Spirited Away (2001)
10-year-old Chihiro struggles to save her parents and find a way home after getting lost in a supernatural world.
Talking points: family relationships, loyalty, the good in people.
Watch out for: some scary scenes, including a bird attack on Chihiro and parents turning into pigs. 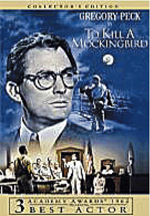 To Kill a Mockingbird (1962)
Based on Harper Lee’s Pulitzer Prize-winning novel, the story follows lawyer Atticus Finch as he defends an African-American against an unjust rape charge in 1930s Alabama, and protects his kids from prejudice.
Talking points: family relationships, friendship, honesty, prejudice.
Watch out for: violence, mostly portrayed off screen or implied. 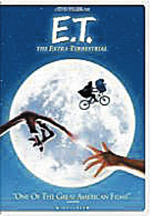 ET: The Extra-Terrestrial (1982)
Steven Spielberg’s classic movie follows a young boy named Elliott’s attempt to help a stranded alien get back home and defend him against the government.
Talking points: friendship, growing up, honesty, loss.
Watch out for: scary and upsetting scenes, brief but strong language, consumerism and the alcohol intoxication of ET and Elliott. 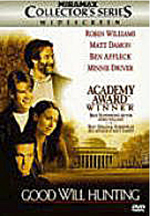 Good Will Hunting (1997)
The Oscar-winning script by Ben Affleck and Matt Damon explores the life of Will Hunting, a young janitor at MIT portrayed by Damon. When his extraordinary math skills are discovered, Will comes to terms with his life with the help of a psychologist and a new love interest.
Talking points: dating, crushes, friendship, growing up, honesty.
Watch out for: frequent strong language, mild sexual scenes, drinking and smoking.

This article appears in the February 2011 issue of MetroKids.
Categories: Play
Tags: all-time, Back to the Future, dvds, ET, family, Good Will Hunting, greatest, kids, movies, Ponyo, Spirited Away, The Wizard of Oz, Time Bandits, To Kill a Mockingbird, Toy Story, up