Women Not To Be Taken for Granted

During March we observe Women’s History Month, but instead of just a month, women could rightfully claim a year, a century, a millennium, maybe the whole of history since Eve.

Even a seemingly gender-neutral book like London: From Roman Capital to Olympic City by Richard Platt, with evocative urban landscape drawings by Manuela Cappon (Kingfisher, $16.95), would leave quite a hole from the middle to the end of it without two Queen Elizabeths and Queen Victoria in between. The book has a sweeping scope, covering London from a Neolithic camp in 3500 BC to the future Olympics, with drawings that give a bird’s eye view of the buildings and people as they evolved and functioned over time. 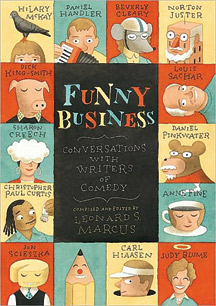 Leonard S. Marcus’s Funny Business: Conversations with Writers of Comedy (Candlewick, $21.99) interviews five women among the 13 writers who describe their childhoods, inspirations, interests and advice for prospective writers. It is the kind of book that can inspire any future writer, since each writer has an interesting story to tell. But all tend to boil down not to their backgrounds, but rather to their interest in writing and willingness to stick to it until getting a break that comes out of the blue or takes longer than expected or is just the result of sheer determination.

“Sheer determination” is the byword of many women’s accomplishments when their ambitions were rarely encouraged, if not discouraged. Aviation was a field ripe for women’s ambitions: flying started in the 20th century when women started receiving more education, had to work during World War II and emerged with the idea if not the fact of equality. 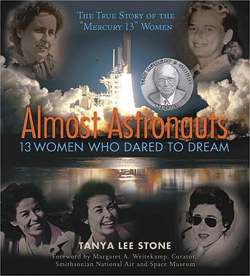 Tanya Lee Stone’s Almost Astronauts: 13 Women Who Dared to Dream (Candlewick, $24.99) tells the fascinating story of the “Mercury 13” women who were considered for the astronaut program and did all the preparations. But the country was just not ready, as the coverage showed with comments from officials and the press that would not be politically correct by today’s standards as the author points out. 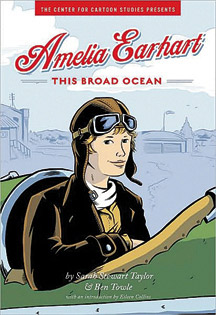 Sarah Stewart Taylor and Ben Towle’s Amelia Earhart: This Broad Ocean (Hyperion, $17.99), is a graphic-style biography of the famous aviator who was lost over the Pacific Ocean. This account reminds us of the pioneering feats of women — those remembered like Earhart plus the far greater number whose recognition may deserve a Women’s History Millennium. We hope that at least during Women’s History Month they will not just be taken for granted.