Mom blogger Raya Fagg rescues a cat, then wonders about releasing pregnant stray cats "back into the wild" is the right thing to do.

The picture to the left is Buttercup/Mango/Mimi.

I found this sweetie pie when I was walking to work one morning. Determined to keep her if I saw her in the afternoon, I knocked on the house where she was dozing, and when the person who answered gave me the go ahead, I promptly took her home.

The Mister was not amused.

Neither were Mittens and Midnight.

The house became a mixture of squeals (from the kids), exaggerated sighs (from the Mister) and hisses (from the cats).

Then Mimi gave the gift that keeps on giving: a dose of fleas.

Luckily, I found someone who was willing to rescue Mimi, but that led me to think about the stray cats in the neighborhood.

What happens to cats who aren't cuddly? One person I spoke with thinks cats are the next squirrels. As much as I love cats, I'm inclined to agree. Cats are sweet until they begin their reign of terror. The front of our house resembles a scene out of The Amytiville Horror with the amount of flies that congregate to "feast" on the cat waste. The smell of cat pee is horrible when a new cat decides to challenge our cats through the safety of the screen. And spreaking of screens, The Mister has replaced a number of them from kittens who have tried to claw their way into the house.

What we can take from this is that cats have a litter about every 13 weeks. Protect your stuff by getting the cat you own spayed or neutered. Then, keep said cat indoors. They are less apt to pick up disease, get into a fight, or meet the losing end of a race against a car.

The Township likes to do the humane thing of trapping an animal, having them fixed, then releasing them back into the wild. But just say you are in the beginning of that kitten cycle, and your rescued Mama cat had four kittens. These four kittens go out a get knocked up (in this scenerio all the kittens are female…roll with me!). Now there are 21 cats who need to get fixed. 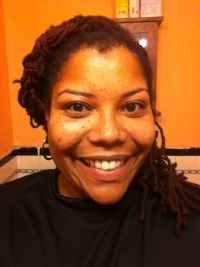 Who has the money or the time? Not too many people *I* know.

So while trap, neuter, relaease may seem like a solution, it can be merely a band-aid on a bigger storm to come.

Raya Fagg is a mom of two from Upper Darby, PA. This post is adapted from her blog And Starring As Herself…MRSRFKJ.