The Meaning Behind Memorial Day

Why, how and where to mark the solemn occasion

Most people think of Memorial Day as the unofficial start of summer, but it is also one of America’s most solemn civic holidays. It is important for Americans to take the time to stop and remember those who have given their lives to uphold and defend the Constitution.

Click here for MK's comprehensive list of area war memorials and battlefields, many of which hold Memorial Day events throughout the weekend — and many of which are listed in our Day-by-Day Calendar.

This civic holiday has been around since after the Civil War. General John Logan officially ordered the day to be observed on May 30, 1868. General Logan was the Commander-in-Chief of the Grand Army of the Republic, an association for Union Army veterans, and he proclaimed an order for this to be the day on which the GAR should remember and honor those who had fought to save the Union.

"Let us, then, at the time appointed, gather around their sacred remains and garland the passionless mounds above them with choicest flowers of springtime; let us raise above them the dear old flag they saved from dishonor; let us in this solemn presence renew our pledges to aid and assist those whom they have left among us as sacred charges upon the Nation's gratitude, — the soldier's and sailor's widow and orphan."

Originally, Memorial Day was called Decoration Day and was celebrated in small towns across the country. The official celebration was at Arlington National Cemetery, where flowers were placed on graves of Union and Confederate soldiers. New York was the first state to officially celebrate the holiday in 1873, and all northern states soon followed suit. But since the original proclamation was very clear that it was a day to celebrate those who fought for the Union, southern states refused to celebrate on May 30 and instead chose other dates to honor the lost Confederate soldiers. World War I changed all of that. In 1971, Congress passed the National Holiday Act, and as a result, Memorial Day is celebrated in almost every state on the last Monday in May — although some southern states do hold a separate celebration for the Confederate soldiers lost in the Civil War.

The way we remember the past and honor those who have been lost on Memorial Day has changed throughout the years. Traditionally most people have laid flowers at grave sites and memorials and hung flags to honor those lost, but a new tradition was inspired by a poem written by a soldier. On May 3, 1915, Canadian physician Lieutenant Colonel John McCrae was inspired to write “In Flanders Fields” after presiding over the funeral of friend and fellow soldier.

In Flanders fields the poppies blow
Between the crosses, row on row,
That mark our place; and in the sky
The larks, still bravely singing, fly
Scarce heard amid the guns below.

We are the Dead. Short days ago
We lived, felt dawn, saw sunset glow,
Loved and were loved, and now we lie
In Flanders fields.

Take up our quarrel with the foe:
To you from failing hands we throw
The torch; be yours to hold it high.
If ye break faith with us who die
We shall not sleep, though poppies grow
In Flanders fields. 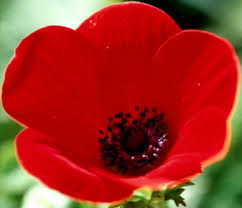 If you have ever seen someone wearing a red poppy pin or corsage on Memorial Day, this is where the idea came from — a poem written by a soldier. After the poem was published in 1915, many people used the symbol of the red poppy to honor lost soldiers. Your family can join in by making your own Memorial Day poppy wreath to hang on your door, or by wearing poppies as a sign of respect.

One simple and moving way to can make an impact on Memorial Day is to thank a veteran or soldier. Kids are great at this, and it is a way that they can feel connected to the day with a feeling of pride. It is also a great way to teach respect. It can feel overwhelming at first, but you can help by showing them how it is done. Have them walk up to a veteran or serviceperson and just simply say, “I want to thank you for your service.” If they are too shy to express themselves in person, have them write a postcard or note with a picture. The National Constitution Center works with the Thank-a-Vet program all year long to write thank-you cards and get them in the hands of veterans across the Philadelphia region; download a postcard here.

Kerry Sautner is the Vice President of Education and Visitor Experience at The National Constitution Center, where families can celebrate Memorial Day Saturday, May 24 – Monday, May 26 with flag workshops and demonstrations, patriotic craft activities and an interactive program on the history of our nation’s most significant memorials, including the USS Arizona and Little Big Horn.