The Life of a Stay at Home Dad

Joe Agro, of Wilmington, DE, may just have one of the most diverse jobs around. “I get to be a chef, playmate, referee, teacher and, of course, maid.” His clients don’t often give him much time to relax, but the rewards of the job are incredible. What does he do? Agro’s a full-time stay-at-home dad to 4-year-old twins, Olive and Poppy. His role, he says, has always been part of his family’s plan.

The same goes for Chris Bernholdt of Devon, PA, who prior to becoming a stay-at-home dad to Adam (9), Sarah (6) and Heidi (3) was a public school teacher. “My wife was always outearning me in her corporate job,” he says. “We had always planned to have me stay at home when the time was right. My skill set is much more suited to be the one staying home. It's the best decision I have ever made about a job.”

According to the 2013 US Census, there are 214,000 stay-at-home dads (SAHDs) in the country, defined as fathers who have not been in the labor force for at least 52 weeks and whose spouses have been working during that time.

“Contrary to media reports about laid-off fathers who reinvent themselves as full-time caregivers, most of the men we interviewed [for a study dubbed "The New Dad"] report that being a stay-at-home dad is a choice, not simply a reaction to an unanticipated job loss,” says Brad Harrington, executive director of Boston College's Center for Work & Family.

There are many reasons behind that choice, according to Chad Welch, the vice president of the National At-Home Dad Network. “First, this has to be a joint decision. [Both parents] need to feel comfortable taking on those roles,” he says. “But if it works for your family, don’t let society convince you not to do it. You won’t regret the connection it creates between you and your child.”

A day in the life of a SAHD

“Running the household is my job,” Agro says.

Dawn breaks: “My kids wake up at 6am, so I do, too. We either watch TV or play before breakfast, and we are out the door by 8am. Sometimes, we wake up Mommy so she can get to her demanding career as a corporate litigator.”

During the school day: “While the kids are at school, I attempt to follow a to-do list. So I clean, run errands, prepare food, do laundry. . . .”

After school: “We might play outside at home or at a playground, go to a friend's house or have a fun outing.”

After dinner: “We usually have bath time, and depending on how that goes, we play or watch TV before Mommy comes home.”

Next page: Dad-to-dad networks and perceptions 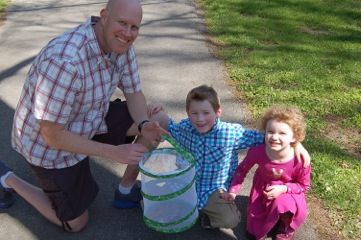 Along with caring for kids and households, many SAHDs are also active in the community, volunteering at schools, authoring blogs and taking part in the wide-ranging networks that support fathers who choose to be the primary daytime caregiver. Bernholdt, for one, blogs at Dadncharge.com, has an essay in the new celebrate-fatherhood book Dads Behaving Dadly and created the Philly Dads Group.

The networking is important, Welch says: “Being an at-home dad can be an isolating experience; there’s a need for social interaction. [Dads are] not always welcome in mom playgroups. Getting input from guys in the same situation can give you important and practical information.”

What do the kids think about their SAHDs?

“My kids think it is awesome, often being the only kid in class whose dad is helping out or attending their performances,” Bernholdt says. “When my son was in Kindergarten, he was asked what he wanted to be when he grew up. Instead of the usual police officer or firefighter, he said, ‘I want to be a stay-at-home dad.’

“I think that changing perceptions about not only me staying at home but my wife working is important,” continues Bernholdt. Agro agrees; his kids also don’t think it is atypical for a dad to be at home.

“No matter whether you are a mom or dad, you have to have patience. Without that virtue, you won't last long in this business,” Bernholdt says. “There is no definitive answer when it comes to determining whether moms or dads are better at this. In the end, we are all just trying to parent to the best of our ability. I have had the privilege of getting to know many stay-at-home dads who are just as tender and loving as any mom I have ever met, and I am proud to be in their company.”

8 Places to Interact with Animals