With Father's Day coming up this Sunday, we turned to Chris Bernholdt, our resident dad blogger. Turns out, the super-powers of a stay-at-home pop are a potent force. Read on to find out why — and whether you venture out to an area event or huddle at home to celebrate, have a Happy Father's Day.

When I became a stay-at-home dad six years ago I had most of the concerns that most of us have starting out. How was I going to run the household successfully and take care of all the kids at the same time without going crazy?
As a former teacher in a K-8 school for three years, and in a high school for seven years, I felt that I had the necessary training for dealing with everything a kid could throw at you. I was excited and nervous at the same time. I was looking forward to focusing on teaching only my kids instead of everyone else’s kids.

I have had many rewarding moments as a teacher. I have had students who have been very successful and who have come back to share their success with me as they grew up into adults. However, there is no feeling greater than your own kids making you proud of the people they are becoming, when you know that you had a part in making that happen.

There is one such moment as my tenure as DadNCharge. Being a stay-at-home dad means that you are constantly going to be around moms. While we are a growing breed there is still that contingent of stay-at-home moms who make everything happen and being around them intimidated me. I didn’t understand how they could so easily make friends with chit-chat; they seemed so at ease with each other. Meanwhile, I picked up my kids from pre-school, waved to the teacher and made a beeline for the minivan.

When it came time for my son to go to elementary school I really felt the added pressure. Parents were volunteering left and right and getting so involved in their kids’ schoolwork. I thought, “How am I going to add this to the million things I already do?”

Long story short, I found a way. I became a classroom volunteer and talked to other moms. I even became a part of a group that called themselves the Y Mommies, who were the moms of the preschool kids at our local YMCA.
After some time it didn’t matter that I was the only dad among these great moms. All of them loved that I was a stay-at-home dad. Many of their kids had fathers who were not positive role models and they used to tell me that it gave them hope that there were good dads out there. 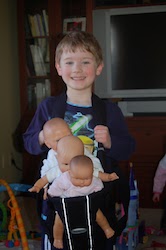 The ultimate compliment however, came from my 7-year-old son when he was in first grade. The teacher asked the question, "What do you want to be when you grow up?" Asking a kid what he wants to do when he grows up is constantly in flux. Heck, I wanted to be an archaeologist when I “grew up,” but I think that had to do more with getting chased by a giant ball and a certain fedora-wearing professor than anyone.

Kids in his class were seated in a circle and sharing what they wanted to be. Many of the kids said typical things like baseball players, doctors, firefighters and police officers. I was watching my son with great anticipation. He seemed very excited about what he was going to share.

The time came for my son to take his turn and to be honest I was super-intrigued about what he would say. For the longest time he wanted to be a superhero and that changed to a toy-maker. He shocked everyone, including myself, when he said, “I want to be a stay-at-home dad.”

That moment solidified my faith in what I was doing at home was making a difference. My son had become a loving, thoughtful and polite young man to his younger sisters, and I know it is because he sees the way that I love them and emulates it.

When I get discouraged about not doing enough or feeling like I don’t make a difference in the world I remember this day the most.

I have since then treated every day as an opportunity to be the best dad I can be for my kids. Hey, if I beat out the superhero job for future consideration I must have some super-powers of my own.

Chris Bernholdt is a local stay-at-home dad of three and founder of the Philly Dads Group. This post is adapted from his blog DadNCharge.