This week at the library we found a cute book called Brave Santa (by Nancy Poydar) about a little shy boy named Jack who is afraid to sit on Santa's lap and tell him what he wants for Christmas. After practicing at home with his dad, they finally venture out to visit Santa at the mall. Much to the little boy's surprise, he discovers that Santa is shy too! Both Jack and Santa overcome their shyness and act bravely in the end.

One learning technique that I use often with baby bookworm is to read books before introducing a topic. For instance, that trip to the doctor becomes less scary if the Berenstain Bears do it first. Or, a trip to the farm becomes more educational if we've first read The Big Red Barn and can make connections back to what we've read while on our trip. 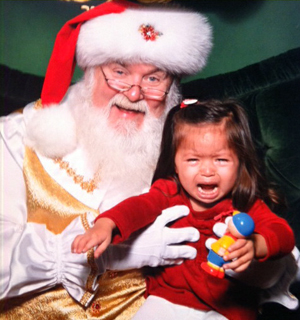 Brave Santa is a fantastic book that you could read before going to sit on Santa's lap. We did not. Maybe better luck next year.  And, Santa — you look great by the way!

Happy Holidays!  How did your child take to Santa this year?

FUN FACT: Separation anxiety develops between 6 and 8 months of age and generally peaks at about 15 months. Stranger anxiety peaks at about 8 to 10 months, and has been found to depend to some extent on the stranger's physical appearance.  If a child encounters a person that doesn't easily fit into his existing schema of what a person ought to look like, then he or she might act afraid of the stranger. 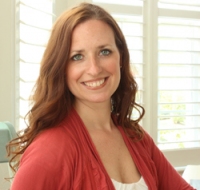 No wonder there are so many crying Santa photos.

Marissa Kiepert Truong, PhD is a Chester County, PA mom and early education consultant. This post is adapted from her blog Land of Once Upon a Time.