For Kirt Gittens, 18, Mountain View Christian Camp in Danville, PA has been an important part of his life. He joined his family at the annual all-ages session until he was old enough to attend on his own. When he outgrew camper age, he eagerly became a volunteer counselor.

“It was a really nice atmosphere that was loving and friendly,” recalls Gittens. “We had Bible studies in the morning and afternoon, but it was also a full camp experience with sports, swimming and other activities.”

Kirt and his three siblings, who live in New Freedom, PA, are the second generation of their family to attend Mountain View; their dad was also a camper there. “I didn’t have to worry about what else they were going to be involved with or be taught because I know the faith principles of the camp,” says mom Ruth. “It was just a natural fit for us.”

“We focus on the whole person, as far as body, soul and spirit,” says Mountain View administrator Jonathan Stassel. “We have sports activities for the physical side and for the emotional and spiritual side we focus on Bible lessons that are age-appropriate. We share the gospel clearly, but we also want to disciple and help people make wise decisions for the rest of their lives.”

Even as the economy forced some families to forgo summer camp over the past few years, enrollments at faith-based camps — day and residential camps that feature specific religious or spiritual values — remained steady. Like at typical camps, kids make friends, swim, enjoy sports and arts and crafts, but these camps add a religious component to the routine.

“Oftentimes, faith-based camps are nonprofit, which means they might be lower-priced or provide scholarships,” says Susie Lupert, executive director of the American Camp Association for NY and NJ. “Food preferences may be a factor. For instance, a faith-based camp may be a better option for families who keep kosher.”

Faith-based camps tend to have their own campus and run summer-long programming. Vacation Bible Schools (VBSes), a popular, often free summer option, occur for one or two weeks at the church or religious institution that runs it. Click through for lists of area VBSes.

Many faith-based camps stress religious values over religious practice and welcome children of any faith. For example, while the JCC Camps in Medford, NJ is based on Jewish values, camp director Aaron Greenberg estimates that as many as 20 percent of JCC campers aren’t Jewish.

“Diversity is one of our themes this summer,” Greenberg explains. “That can mean many things, including different streams of Judaism; people who have no religion at all or those not of the Jewish faith; people with special needs; people with single parents or of same-sex marriages. We’re trying to make it clear in this day and age that everyone is different and we want to welcome everybody.”

Camp Arrowhead, a youth ministry experience in Lewes, DE also hosts campers of all faiths. “Our strong suit is sense of community and our commitment to physical, moral and spiritual safety,” says director Walter Lafontaine. “While some camps have kids choose the activities they want to do, we are a decentralized program where kids are in a small group with a counselor, and they participate in activities as a family group.” 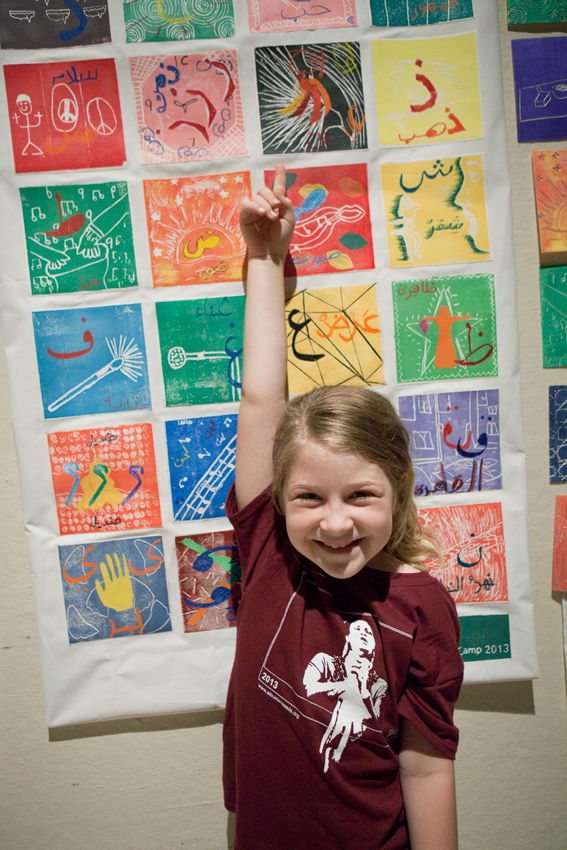 Al-Bustan Camp, at the Friends Select School in Center City Philadelphia, is an 11-year-old secular, culturally based arts and language summer program that draws “a healthy mix of ethnicities and faiths — from Christian to Muslim, Hindu, Jewish and atheists,” says executive director Hazami Sayed.

As the area’s only camp with a focus on Arab culture and teaching Arabic — campers this summer will create a multimedia bilingual storybook with an artist-in-residence from Lebanon — the camp has a specific appeal to Muslim Americans who would like to learn Arabic to enhance their religious practice, though none are performed at camp. “Faith is believing. We believe in expressing ourselves through the arts and giving kids [like camper Eden H., left] the tools to express themselves through artistic means,” says Sayed.

When choosing a program that focuses on faith, ask the following questions to be sure you’re comfortable with both religious and non-religious camp components.

“Whether faith-based or not,” says Lupert, “the point of summer camp is for children to have fun, be outside, swim and do activities they’re not necessarily getting all year round.”