Q. My 2½-year-old has started to push kids out of his way to get to things (toys, the slide, etc.) How do I get him to mind his manners?

A. This “rushing to get there” behavior has more than likely resulted from one of two things: Either your sweet baby boy has attended the Mummer’s Parade or he has been hanging out with other children.

Toddlers tend to come in the more rough-and-tumblin’ variety than their younger counterparts and generally have very little patience (much like their fathers). In order to get to their next task faster, they will shove, chop and mow their way through, especially if they were to stumble across something as delicious as your iPhone or a shiny new pair of garden shears.

Now don’t get me wrong, I’m sure that there are lots of patient 2-year-olds out there.… I just haven’t seen, met, or ever heard of one. (Sleeping 2-year-olds do not count.) Both little boys and little girls at this age are in a hurry. They are very busy little people disturbing sleeping animals, unpacking cupboards and rearranging the furniture. Whatever the task, they just feel like they need to get to the next thing, like, yesterday!

It is a rare sight indeed when you see a little toddler lagging behind his parents. What we usually see is a frantic father trying to catch up with his toddler ninja who is skipping through the mall shedding clothes faster than Pamela Anderson. 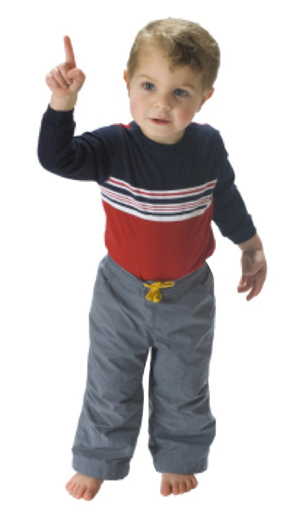 So as to manners, this is a toughie. He probably isn’t trying to be mean, he’s just not wanting to wait behind some slowpoke when that gleaming slide is just sitting there begging to be ridden. Try to get him to slow down a bit. Take it down a notch by acting out how it feels to be shoved aside when he is waiting for something. Be dramatic.

Better yet, point out another obnoxiously out-of-control little one who is exhibiting that type of behavior, so he can see what he looks like to others when he is over pushy.

But try to do this in a calm state of mind. Channel Yoko Ono, use your practiced yoga techniques and speak to him as serenely as possible while explaining to him the important issues here: waiting his turn in line, other people’s personal space and why in heaven’s name Ryan Seacrest is a celebrity? (Really , none of us understand that.)

Jeanne Martin is a freelance writer and graphic designer by day, one sarcastic mother of two by dusk and completely unqualified to write this advice column at any time.