Common prenatal skin conditions and how to treat them 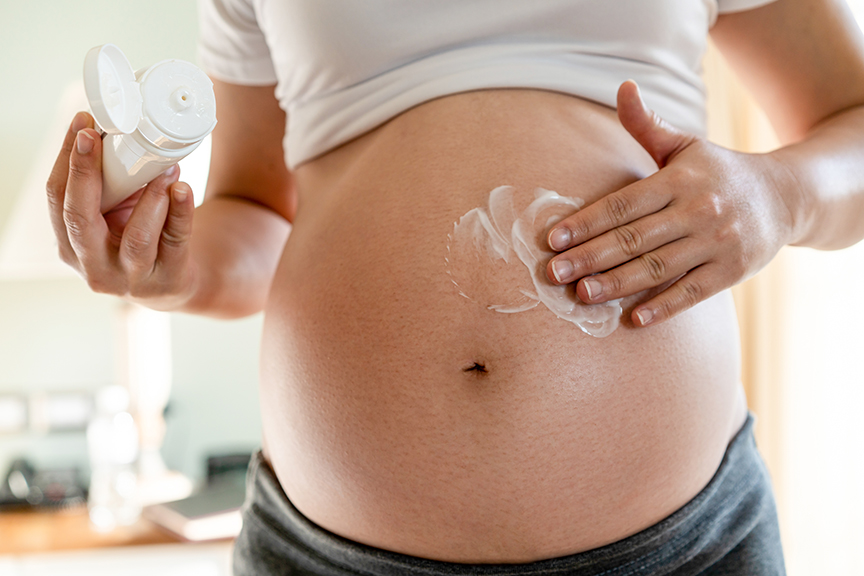 With any pregnancy comes changes to a mother’s skin—such as a growing belly that stretches the skin — but beyond that there are other skin changes brought about by hormones.

“Because of [hormones], we see changes to our skin, hair and nails,” says Jamie Goldberg, who has been a dermatologist for 10 years and is currently working with Kaiser Permanente in Halethorpe.

Pregnancy-related skin conditions can occur at any stage in the pregnancy, though most are the most intense during the third trimester.

According to Goldberg, most of these changes are normal, and many of them go away—or are significantly reduced — after your pregnancy, but it’s helpful to know what they are and how to treat them.

What kinds of skin conditions can occur with pregnancy?

Melasma causes dark patches on the face, cheeks, forehead or temples. It’s usually related to hormones and can be triggered by sunlight. For Melasma, Goldberg usually advises the use of hats and daily use of sunscreen.

Linea nigra, also called the “pregnancy line,” is recognizable as a dark vertical line over the lower abdomen, and it can fade completely after pregnancy.

Rashes
Saurabh Singh, who cares for patients in Rockville and Silver Spring at U.S. Dermatology Partners and cofounded nationwide skincare service Skintap, adds that among the most common pregnancy-related skin conditions he sees are PUPPP (pruritic urticarial papules and plaques of pregnancy), pemphigoid gestationis and different types of itching, including prurigo of pregnancy and cholestasis of pregnancy.

PUPPP typically appears first on the abdomen, sometimes involves the extremities, and rarely involves the face, he says. PUPPP rashes can look and feel a lot like hives and there are some things doctors can do to provide relief, such as providing an oral antihistamine or other medications.

“I recommend fragrance-free products or moisturizers anytime moisture is needed,” Goldberg says. “A lot of people are actually sensitive or allergic to fragrance. So that can make itching or dry skin or eczema even worse.”

Prurigo of pregnancy often looks like small pimples or acne. This rash typically shares a color palette with stretch marks. Some women report that the bumps feel itchy or uncomfortable, but the rash is typically nothing to be too concerned over for mother or baby.

A fairly common condition, it occurs in approximately one out of every 300 pregnancies, according to an article published in the American Family Physician, and it isn’t uncommon for it to last weeks—or even months—postpartum.

Some people who have acne experience relief while pregnant, Goldberg says. Others develop acne, or their acne gets worse with the hormonal changes that come with pregnancy. However, while there are many acne products that are safe to use during pregnancy, there are some that aren’t.

“You should always check with your doctor [first] to ensure safety,” Goldberg says.

Stretch Marks
Another common change to the skin during pregnancy is the appearance of stretch marks, which look like red, pink or purplish lines in areas that stretch. According to Goldberg these are most common on the belly, thighs and breasts. Most of the time stretch marks fade after pregnancy, but not always completely.

“There are many creams marketed to reduce stretch marks, but most studies don’t report significant changes,” Goldberg says. However, she notes that plain, fragrance-free moisturizer helps.

When should you be concerned?

There are some conditions that may warrant further supervision or evaluation by a dermatologist or your OB/GYN.
“If you have a severe rash, see your doctor, particularly one where you have blisters or intractable itching.

[Intractable] itching is itching that keeps you awake at night and doesn’t go away with the dry skincare methods I mentioned,” Goldberg says.

“The only two conditions (discussed here) that could harm the baby are cholestasis of pregnancy and pemphigoid gestationis,” Singh says.

Cholestasis of pregnancy is a liver condition that can occur late in pregnancy, according Mayo Clinic, a nonprofit that serves patients worldwide and is based in Arizona, Florida and Minnesota.

This condition causes intense itching without a rash that typically occurs in the hands and feet. Sometimes, due to the risk of complications, including preterm birth, lung problems in the infant or even stillbirth, doctors recommend early delivery, according to the nonprofit.

There is no known way to prevent cholestasis of pregnancy, and doctors aren’t certain what causes it.

Pemphigoid gestationis is not as common as cholestasis of pregnancy. Also known as herpes gestationis, it occurs in one out of every 50,000 mid-to late -term pregnancies, according to the American Family Physician. The American Osteopathic College of Dermatology (AOCD) notes that it usually presents during the second trimester of pregnancy but can occur at any time.

Despite its name, PG is not related to the herpes virus. It is an autoimmune condition where the body attacks proteins found in the skin.

PG presents as a red, itchy rash that forms plaques and papules around, and sometimes including, the belly button. Initially, the lesions resemble hives, but after a couple of weeks, blisters may form. PG typically flares shortly after delivery and then resolves within three months, according to the AOCD.

PG data does not suggest an increased risk of death for the baby, however AOCD notes the baby may be small for its gestational age.

The More You Know

It’s important to know the risks of any changes you notice during pregnancy, but remember that most changes are common, temporary and nothing to be embarrassed about. For more details on these and other dermatological conditions, talk to your doctor.

What Ehlers Danlos Syndrome is (and isn’t)