Selected as the Delaware recipient for Outstanding Service by a High School. 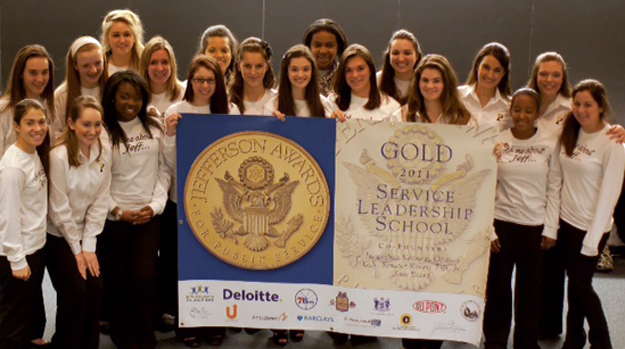 The Jefferson Awards-Deloitte Students in Action program has selected Padua Academy in WIlmington as the Delaware Recipient For Outstanding Service By a High School. Padua’s team competed with 16 other Delaware private, public and charter schools participants in an April 9 regional competition at the University of Delaware.

Launched in 2006, Students in Action is a national youth leadership program that is part of the Jefferson Awards. Teams at more than 325 U.S. high schools encourage fellow students to become engaged in their communities. The program’s goals include:

In the 12 months, students at Padua Academy have donated more than 30,000 hours to community service projects. Padua’s faculty and staff have volunteered more than 15,000 hours. According to Jefferson Award calculations, this contribution of time for community service is worth more than $1 million to local, national and international humanitarian agencies and schools.

Salesianum School, also located in Wilmington, was the program’s 2009 and 2010 National Recipient for Outstanding Service by a High School. Its team put together this video to describe the program.

The Jefferson Awards for Public Service was founded in 1972 by Jacqueline Kennedy Onassis, Senator Robert Taft, Jr., and Sam Beard to honor Americans who have performed outstanding public service and to inspire others to follow their example. Students in Action was created in 2006 in partnership with Deloitte. Its youth leadership teams in high schools celebrate great volunteers, inspire others to get involved and help raise resources to expand volunteer activities.