One Pelican at a Time Book Review

The Gulf Oil Spill of 2010 was a horrific event that stunned the country and the world. In addition to the financial ruin of the region that ensued, entire ecosystems were devastated. For those of us who were not immediately or directly affected, the news coverage, film and photographs were heartbreaking. I will never forget the images of birds drenched in thick oil from head to toe, helpless. The event propelled people from all over the country into action.

Explaining disasters to children is especially difficult. It's easy enough for an adult to grasp the severity of a situation like an oil spill but the same event and all its consequences are not so simple for a child to comprehend. Children's books are a great source to turn to when attempting to explain.

Last summer, children's author Nancy Stewart sent my monsters a copy of her book One Pelican at a Time, illustrations by Samantha Bell (Guardian Angel Publishing, $19.95, ages 2-12). The plot follows the heroic and caring actions of two young girls, Bella and Britt, as they help an old pelican whose life is put in danger by the oil spill.

Caring for the Earth

One Pelican at a Time is a wonderful book for children. While the concept of an oil spill is still impossible to grasp for the younger ones, KM understood the implications for the old pelican whose body was covered in oil during the first read. 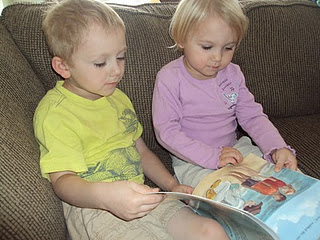 She was already familiar with images from the news and I'd explained near exact situations involving pelicans before. LT recognized that the the pelican in the book was hurt and would likely get very sick if Bella and Britt didn't help quickly.

Caring for the earth is a lesson that must be taught early so that it sticks for a lifetime. Children's books like this that draw from real life situations are magnificent. It's my firm belief that children do need to know what's going on in the world, even if it's not so pleasant. Stories of heroism, sacrifice and caring for our planet and fellow human beings are important for all of us to read, especially our little ones. The topic of the oil spill is absolutely relevant and a perfect opportunity to teach, promote earth-friendliness and conservation to kids.

We Are the Caretakers

This particular book tugs at my heartstrings, reminding me of my own childhood and how I helped my mother rehabilitate injured owls, hawks and snakes. As a park ranger in Maryland, my mother took it upon herself to care for animals that were found injured in the park by cars, power lines, etc. I learned so much from these animals, about how they lived, what they ate, how they behaved, etc. firsthand. I also learned about the relationship between these animals and humans and how humans could be the care takers of not only other humans, but of animals that were in need.

"One Pelican at a Time" teaches the same thing: Animals are living things too and when injured or put in danger by humans, it most certainly is our responsibility to help them.