People often ask me why I don't have more than one kid and I reply with my favorite quip, "Children are like special offers, one per household."

The reality is that when I was an immature, young mom, navigating the middle-of-the-night feedings, the change that took over my life and the realization that that baby was *my* baby, I wanted a do-over that would include not having children.

I realize that children are a blessing and that my pregnancy was something that many cannot easily have. I realize that my daughter was not the reason for things not being picture-perfect, but in those early days I would look at this child, and the responsibility that I now had, and feel that it was more burden than blessing. I wished for something, anything, different.

I am not exactly a religious woman, but I do believe in karma and follow a line of thinking that goes a little like "Be careful what you ask for." My daughter was, and is, a beautiful kid, and I am fortunate to have her.

When she was about 16 months old, she kept getting sick. At first I thought I was being punished for my constant whining and worrying about being a mother. Then her dad and I noticed that she would get really sick when she consumed dairy products.

She actually got hazard-level, vomit clean-up sick. Her face would break out, her nose would run and she would suffer terrible stomachaches and refuse to eat.

Trips to our pediatrician resulted in a bit of a brush-off. The doctor considered what we had to say but would try and steer us in other directions. He would say that she wasn't used to her new diet. That she had eczema. That she was too full.

At first I blindly followed his words. Who was I to question the doc? But as my kid threw up more meals than she ate, I knew that something was wrong.

Holding my kid in my arms, I made one more call to the doctor, this time demanding a referral for an allergist. My request was met with a denial from the office manager. After asserting myself (a raised voice may have occurred) we were finally granted the referral needed for the allergist.

The day we took The Bee to get tested for allergies is one that is hard to forget. As we waited for our appointment she played with the toys in the waiting room, read a book with me and sang a song with her dad. Once the physician came in to examine her, things were suddenly real. We explained her problem and the skin test was administered.

As we learned what the testing would include, I wanted to be able to switch places with The Bee. No matter my feelings on motherhood, watching her suffer through testing was so horrible. We had to help keep her still as a nurse marked her arm with possible allergens, and then watch as she was pricked with about 25 different samples up and down her arm. She cried as the needle touched her skin, and I had to stifle a tear or two watching what looked like a sewing machine in action take place along her little forearm.

Minutes later, The Bee's arm erupted in bumps and red splotches as allergies to dairy, shellfish and environmental things (pet dander, grass, pollen) were revealed. After some medication to calm the reaction, the doctors provided us with what would become our new lifestyle: pages of medications, instructions and plans.

The baby who felt like a burden became someone I needed to protect. These allergies were new and scary, danger lurked everywhere and my job was not to worry about what I needed but to care for her. I no longer went through the motions as I had often found myself doing but really looked out for her best life.

The choices we make as a family have sometimes been a challenge. Due to the lingering guilt I often feel from those early years, I can allow choices that may not be the best. Even now, years later, stray memories can leave me feeling conflicted about my role as mother.

Educating The Bee and allowing her the opportunity to make some of her own choices have helped. She can talk to me about what she is feeling and I can share my opinion without laying all of my issues on her. I sometimes look at her and wish I had been more aware of my feelings without the medical drama. Forgiving myself for not wanting to mother has been hard. As we both continue to make choices for our lives, I know that I have given her my love and the best of all things that I can. Those early thoughts are there and while they are not my best memories, the choice that I made to get over the guilt, bad feelings and negativity is what makes me know for sure that I am mom.

Rachée Fagg is a Delaware County, PA mom. This post was adapted from her blog, Say It Rah-shay, as part of the "I'm a Mom" Moment editorial series, made possible by Seventh Generation. 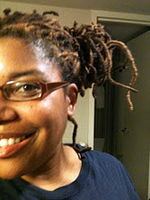