Will kids like the film about the making of Mary Poppins?

As far as I'm concerned, Mary Poppins is a practically perfect film in every way. I first saw the Disney classic when I was just 4 or 5, when the film was re-released and shown on the majestic screen at Radio City Music Hall (preceded by a now-rare non-Christmas show featuring the Rockettes). From the second Julie Andrews alighted on the Banks family's front stoop and slid up the banister, I was hooked, and the movie remains a favorite to this day (Dick Van Dyke's atrocious Cockney accent notwithstanding). Somewhere in my photo files, there's a picture of the no-longer-5-year-old me grinning like an overgrown fool next to Disney World's Mary Poppins walkabout character during a Supercalifragilistic breakfast at the Grand Floridian resort.

My love for the movie sent me to the books on which it's based, which I devoured in elementary school. The Poppins on the page was quite different than Julie Andrews' twinkling characterization, darker, more severe, yet still the conjurer of magical kid adventures that have stayed with me all these years. Given my affinity for both versions of the ultimate nanny, seeing Saving Mr. Banks over the holidays was a must. My sons, die-hard Disneyphiles who know the Florida parks like they know our neighborhood, are fairly well steeped in Disney history. And as we'd all recently watched The Boys, an engrossing documentary about the Sherman Brothers, the songwriting team behind Mary Poppins and a ton of Disney standards, they knew a bit about the difficulties Walt and his moviemaking team had convincing author P.L. Travers to sell them the rights to her signature sitter. Armed with this knowledge, my whole family set off for a Christmas day matinee of Mr. Banks. 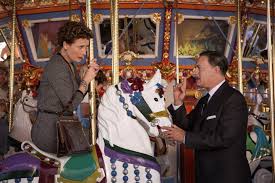 Emma Thompson's been a favorite actress of mine for years, stretching back even before the still-sublime Sense & Sensibility, and she truly is perfection as the prickly Pamela Travers, giving a cold character hints of humanity. The movie shifts between two time periods in Travers' life, intercutting the attempts of Tom Hanks' Disney to convince the near-bankrupt author to entrust her cherished creation to him with her childhood memories of a hopelessly drunk yet imaginative Aussie father she attempts to redeem through her portrayal of Mr. Banks. My 11- and 14-year-olds were much more interested in the Disney-era sections, especially as two actors they like — B.J. Novak and Jason Schwartzman — play the eager-to-please Sherman Brothers (the kids have been binge-watching Office reruns featuring Novak and are fans of Schwartzman's work with Wes Anderson, like Rushmore and Fantastic Mr. Fox). They were less enthralled with Travers' childhood flashbacks, though they were paying attention: My younger son immediately equated Travers' aversion to the use of red in the Poppins movie to her horror at seeing her ill, inebriated father cough up blood.

As a word pro with a deep appreciation of the type of story-telling I feel Disney does so well, I was especially interested in the clash of creativity and commercialism represented by the push-and-pull between Travers and Disney. And I did think the movie held together fairly well, though I had trouble seeing past Tom Hanks' Hanks-ishness to find his inner Walt and could have done without the super-treacly friendship between Travers and a chauffeur whose wheelchair-bound daughter is a fan of the Poppins books.

For anyone with a similar soft spot for the Poppins character, however, it really is worth a watch. But if I were to see it again, I'd leave the kids at home. Despite the plot revolving around the making of a Disney movie, Travers is a difficult main character and the story's underlying themes — family redemption, the selling out of a dream — are decidedly adult. And if my teen and tween Disney-loving kids got fidgety, I'd imagine younger children would have a real problem sitting quietly through the film.

The upshot: If you're off to see Saving Mr. Banks, make it a date night and leave the baby-sitter a DVD copy of Mary Poppins to keep the kids entertained at their own level.