Mom is afraid of spiders

Last week I came face to face with a wolf spider in the shower at my mother's house. Needless to say, my shower ended rather abruptly and my Mom swiftly removed the arachnid and placed it outside. When I was a kid, however, my Mom wasn't so understanding about my spider revulsion.

Somewhere during my teens, I developed a ridiculous fear of spiders. I'm not sure when or even why this happened as my persistent arachnophobia contradicts how I was raised. As a young child, my Mother brought home all sorts of rescue pets (she was a Park Ranger and people dropped off injured or abandoned animals at our place), including a female tarantula named Loredo which we had for years. In addition to our creepy crawly sibling, we at times had owls, an iguana, turtles and snakes. Plus, we lived in a farm house facing a huge meadow, backed against a forest. The spiders and snakes out there were plentiful, indeed and that didn't bother me then.

After my parents' divorced, my brother and I would visit my mother every other weekend at her log cabin – in the woods. One night, we both realized we were being watched by a very large spider on the ceiling. This thing was enormous and still ranks as the largest wolf spider I've ever seen. It hung in the corner of the arched ceiling all night long… never moving. Of course, there was no sense waking up our mother to remove it. She would have just shaken her head, called us silly and abandoned us to the wrath of our fears (Sorry, Mom, if you're reading this, but it's true). So brother and I took turns watching the spider, to make sure it never moved. While one of us watched, the other would sleep. Eventually we both fell victim to exhaustion and in the morning, the giant spider was gone. Egad! Where did it go!? I still want to know!

Then that time there was a black snake in Mom's couch… oh, geesh, I could go on and on!

Nowadays, I've gotten much better about simple house spiders over doorways and such although I still get that ick feeling. It's the wolf spiders and those crazy fat spiders that lurk on the siding of the house that have angry seizures if you approach them – they truly freak me out. My husband accuses me of being overly dramatic about spiders (apparently I think it's cute) but I seriously can't stand crossing paths with an arachnid. I don't mind if they're out in the woods but I do not want them in my house. I know this is not possible, however, as spiders ultimately find their way into our basement no matter what. 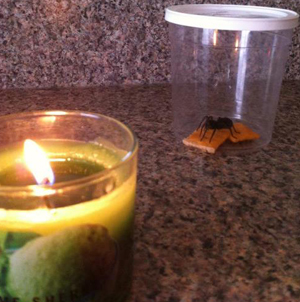 Recently, while I was safely napping, LT came up from the playroom to inform my husband that there was a "big spider" on the floor. Guess what was waiting for me on the kitchen counter when I woke up? Oh, nothing special. Just a giant wolf spider sitting under a big jar, standing on a Cheese-It… with candles lit around the jar like some sort of shrine. Thanks, husband! Real funny. Heck, the spider was so big I could see the eyeballs looking at me! I swiftly demanded Hubby remove the spider and drive it clear out of the neighborhood. He did.

I try really hard not to transfer my fear of spiders on to the kids. I've done an okay job so far. Hubby helps deflect my sometimes dramatic reaction to spider sightings by playing pranks and jokes. All this helps.

My two oldest (7 and 4) have occasional reservations about arachnids, but generally stay calm if there's a spider about. I've even said to them both, "Mommy is so weird. Don't be afraid of spiders like Mommy. They're small and afraid of humans. Don't hurt them and they won't hurt you." Meanwhile my inner fear is saying, Yeah right! Smash it! Smash it! If ML (3) sees a spider she starts baby talking to it and gets way too close for my comfort, like she's going to give the thing a hug. AJ (2) loves every bug and spider he comes across. So far, so good.

While I can't help but check every corner when I walk into a room, I do recognize that spiders are living things and I'm compassionate enough to prefer they are caught and waed back outside (as long as

Hubby does it) rather than squashed. I know how beneficial spiders are to the environment, to gardens, farmers, etc. I won't let my fear define my kids' attitudes toward spiders.