A child's acquisition of a driver's license is a moment moms both dread and cherish. It's scary to think of your child out there on the dangerous roads, but on the plus side, no more carpooling — and there's one more driver in the house who can run out for milk. MomSpeaker Lisa Weinstein just went through the process with her daughter — and the DMV of the great state of New Jersey did not make things easy. Here's her take on the milestone.

Last summer my daughter Melissa, 16 at the time, took on a volunteer job at our local library. Although only a short bike ride from home, my cherub insisted on taking the safe mode of transportation to the library, namely, the "mom chauffeur."

What did she think would happen to her while pedaling the streets of our small suburban New Jersey neighborhood? I don't know. However, I suppose all of those years of her overprotective mommy warning of stranger danger had taken its toll.

Finally, Bob and I convinced our naive girl to pull her bike out from the depths of the garage and pedal the short distance to the library. When her shift ended, we stood outside in anticipation, watching her bike down the street towards home, the huge smile across her face beaming from blocks away!

Once again, I stood outside in anticipation, waiting to celebrate another solo journey . . . this time in a (gulp) . . . car.

As a licensed driver for a mere three days, she had asked permission to take her friend John the short distance to his home.

I hesitated before granting her request.

John would be in the car with her on the first part of the trip, but then she would  have to come back all alone. Nobody to tell her when to brake, when to turn, when to yield, when to signal, when to slow down, when to switch lanes, when to stop, when to go.

Would she survive the two-mile journey?

Would I survive the wait during the two-mile journey?

The road to becoming a legal driver in the State of New Jersey did not come without its challenges for Melissa.

She had passed Driver's Education in school, then completed the mandatory six hours of lessons with a certified driving school, which enabled her to get a permit. Now she could get behind the wheel with two of the greatest driving instructors who ever lived . . . her PARENTS!

Indeed, each session with Bob usually ended with Melissa near tears because her father had dared to use his "strict" voice.

Sessions with me were not much better, since my incessant pounding on the "imaginary" passenger side brake truly rattled her nerves.

All too soon (or not soon enough, depending on your perspective) the day of the driver's test had arrived. I took off of work so I could personally escort my "baby" on the road to adulthood.

Upon pulling into the testing center, we were greeted by an instructor whose look and demeanor were reminiscent of a boot camp drill sergeant. With trepidation, I got out of the car and let Melissa take her place behind the wheel . . . next to Sergeant Scary in the passenger seat.

I watched them go forward a few feet, then stop.

Something did not seem right.

After several minutes, Sergeant Scary exited the vehicle and beckoned me over.

I dared not disobey.

Seems our car lacked an important feature, an emergency hand brake located between the driver and passenger seat. According to the State of New Jersey, the car had to have this feature in order to be used during the test.

Sergeant Scary commanded us to leave, get a different car and reschedule the test.

I dared not disobey.

One month later, armed with a 22-year-old car gifted to Melissa by my mother, we drove to the testing center through a downpour of biblical porportions in our second attempt to earn the title of "licensed driver."

The "rigorous"  test seeks to determine if new drivers can handle grueling road conditions by forcing them to demonstrate two essential skills:

Having practiced parallel parking for most of her waking hours, my daughter tackled the test with ease.

Next stop, the Department of Motor Vehicles (DMV), where we were officially introduced to the 3,974 Identification point system!

Allow me to illustrate the DMV's Identification point sytem.

Unfortunately, Melissa and I had "only" her passport plus the signed driver's permit, thus proving that the 17-year-old girl standing next to me whose smiling picture lit up the inside of her passport was obviously an imposter.

We were told in no uncertain terms to go home and get more proof!

Since we live a mere five minutes from the DMV, this slight delay was met with much happiness and patience from my sweet new driver. (Note to readers who do not have teenagers — I AM BEING SARCASTIC.)

With "el grumpo" next to me in the passenger seat, we drove home, retrieved her social security card and her birth certificate and traipsed back to that joyful, wonderful place . . . the DMV!

"You need proof of address," admonished the eldery gentleman at the reception desk.

"But we were just here 10 minutes ago and they didn't tell us that!" I protested, seriously thinking that I could change the rules of this archaic institution.

"Are you her mother?"

"Does she live with you?"

"Do you have the same last name?"

A half an hour later, a DMV employee handed my daughter that small, coveted piece of plastic proclaiming her a legal licensed driver!

I made her swear that for the first 30 years few months, she would text me before getting behind the wheel and upon arrival at her destination. She agreed to my terms and reluctantly, I let her drive John home.

True to her word, her text alerted me to her departure from John's.

Now came the moment of truth. Her first solo stint as a licensed driver.

I watched her drive down our street with care, stop in front of our house, put on the turn signal and proceed into the driveway, a huge smile on her face!

"Mom, it was great!" she exclaimed. "I felt so independent."

All too soon, the "mom chauffeur" will retire, as Melissa drives off to a college campus, and then to her own apartment . . . her own life. 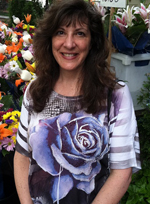