Gazelle Zerafati, then a student at The Baldwin School in Bryn Mawr, PA, last year won a national prize studying migraines — severe headaches that are often accompanied by nausea and often occur on one side of the head. She found that most students were poorly informed about migraines. Parents often know little about them either.

An estimated 30 million Americans suffer from migraines. They most often begin between ages 10 and 40, diminish after age 50, and are three times more common in females. Though their cause is unknown, migraines in some people can be triggered by stress, certain foods, dehydration, seasonal change, hunger or fatigue. They occur more often in people with a parent or sibling who has them.

“Many parents overlook the problem because not much is known about migraines,” says Mitra Assadi-Khansari, MD, a neurologist in Camden, NJ. She says for parents, a red flag can be vomiting. “A child can’t fake that and parents should then know that something is wrong.”

“My daughter started getting them when she was 3, to the point that she will cry until she throws up and then will nap and wake up just like nothing happened,” says Bear, DE, mom Jodi Gennusa. “It seems to happen a few times a year and when the seasons are changing.”

“I think most parents are aware of migraines in adults but not necessarily in children,” says Nancy Cook, a certified school nurse at Newtown (PA) Elementary School. “Many parents assume that headaches are due to stress, eye strain or perhaps not having had enough to eat or drink that day.” 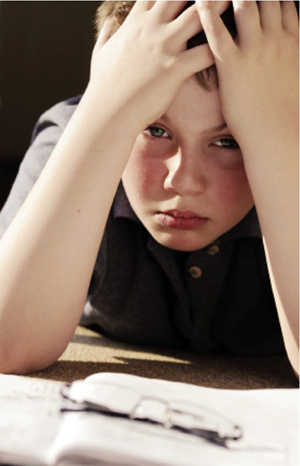 What Do Schools Do?

Denise Manna, RN, a school nurse from Middletown (DE) High School, sees about one student a week suffering from a migraine.

“When students come in with a (possible) migraine, I send them to our special headache room which is dark and quiet,” she says. “If students have a true migraine, they usually need to go home and sleep it off.”

“When a child has a headache in school, we assess the child including a physical exam and history. This can help the family and doctor recognize possible triggers like decreased sleep, missing a meal or the delay of a meal, specific foods, hot weather, seasonal changes or stress,” says Joyce Borawski, RN, a school nurse in Mount Laurel, NJ.

“The best preventative treatment is lifestyle changes or headache hygiene —staying hydrated, getting plenty of rest, reducing stress and maintaining a healthy diet ” says Tara Pezzuto, MSN, an advanced practice nurse of neurology at Nemours/Alfred I. duPont Hospital for Children in Wilmington, DE. She says medication at the onset of the headache can often relieve symptoms.

Dawne Walker, a mother from Wilmington, whose 12-year-old suffers from migraines, believes that certain foods trigger her son’s episodes. “Keeping him on good vitamins, fish oil and unprocessed foods has helped,” she says. “I bought a My-GraStick, a roll-on tube that contains peppermint and lavender oils, at a health food store and it has made all of his recent headaches disappear.”