Maintenance: when will my life begin?

Mom blogger Kelly Jopson brown recently reached her weight loss goal. Now she reflects on her dreams about being thin — and the reality.

When I was obese, I daydreamed about being thin. I thought about all the ways my life would change.

I'd never gain the weight back.

I'd rub it in the face of everyone that ever doubted me or treated my badly.

I'd never obsess over food ever again.

I'd be fighting off boys left and right.

I wouldn't be consumed with a number.

Everything would be right and perfect in my world. When I lost all the weight, that is when my life would truly begin.

I waited 35 years for my life to begin. I turned 35 two days after meeting my goal weight and, if I go by this list, I'm still waiting. Waiting for all of those things on an arbitrary list to manifest themselves. Because the truth is that for all the things in my life that have changed, nary an item has been checked off of that list.

I'd never gain the weight back. The truth is, I've gained some weight back. In fact, I did it almost immediately after hitting my goal. It's not much. I hover between 144-148 these days. I had nearly back-to-back vacations and some heavy stuff happening in my life. I wasn't comfortable with getting up to 148 but I'm not terribly torn up about it either. [I'm currently at 146.] This is all part of the learning process. It didn't end when I crossed into maintenance.

The truth is that for all the things in my life that have changed, nary an item has been crossed off of that list.

I'd rub it in the face of everyone that ever doubted me or treated my badly. I don't rub my successes in the face of everyone that did me wrong. Who wants to hang out with those jerks? Retribution is a nice fantasy — but grace and mercy should take precedence. Instead of revenge, I reflect on my struggle and know that they were just as flawed as me and have problems of their own. And they are probably still jerks anyway. So it wouldn't make a difference. 😉 (Still working on that grace and mercy stuff.)

I'd never obsess over food ever again. Totally still obsess over food. Sometimes its the excitement of earning an indulgence. More often than I'd like, its still the same old demons. Hoping to never again obsess over food was naive. If it were that easy to turn off, I never would have gotten to where I did.

I'd be fighting off boys left and right. I only fight one boy off these days and I am quite okay with that…and I don't fight very hard either.

I wouldn't be consumed with a number. I'm still consumed with numbers. Mileage, speed, average pace, the cost of new gear and the days left until the next race.

I'd be (even more) daring. I've had trouble defining what daring is to me. Things I held myself back from in the past are simply normal now. It's not daring to speak up for yourself, take care of yourself, or put yourself out into the world and seek joy. It isn't courageous or brave or lionhearted or bold. It's just what life should have always been. And it should be that way for everyone.

There was a time I thought I was missing out on life because I was "fat." I had so many reasons to not do things. The truth is that life presents itself when you are actually living. My obesity didn't cripple me, I did that. I spent more time daydreaming than doing.

And maybe that's the lesson I'm really learning from this journey: Stop imagining the future and start creating it.

My obesity didn't cripple me, I did that.

Maintenance is hard. It's harder than the losing. I struggle because I worry a lot. I'm no longer obese and instead of freeing myself from the dregs of worrying, instead being more "daring," I now worry about becoming obese again in spite of my continued efforts.In addition to the new worries, there is a loneliness in meeting your goal. The road behind me is littered with those that think I don't need them, the ones that lost their way and gave up. Up ahead of me, way in the distance, are the ones that met their goals and are off living life…and I can't quite seem to catch up.

There are no more milestones. No more surprises on the scale. And the "attagirls" fade into the distance as people perceive that final milestone as the end. It's like the end of a party. There's so much anticipation leading up to the event, the big day happens and there's confetti and balloons, and then everyone leaves. And all I'm left with is confetti ground into my carpet and wondering how taco dip got in the cat's ear. 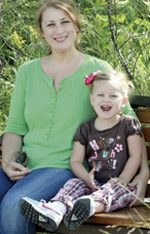 It was fun and exciting — but what now?

Kelly Jopson-Brown is a New Castle, DE mom. Read her blog, The Turnip Farmer, at www.TheTurnipFarmer.com or follow her on Twitter @mommabrown08.