The new Drexel Square Park opened with local kids playing video games, that they designed, displayed on the side of the 29-story Cira Centre in Philadelphia.

Kids, teachers and local game designers gathered in the rain at the new Drexel Square Park Monday evening to show off video games designed by local students on the world’s largest video game display — the side of the 29-story Cira Centre.

Despite the off and on showers that put a damper on the party to mark the opening of the new park at 30th and Market streets, the weather cleared enough around 8:30pm for Skyscraper Games by Kids founder and Drexel University professor Dr. Frank Lee to welcome the crowd and explain the history of the program. In 2014, Lee created the world’s largest architectural video game display on the same skyscraper. Taking inspiration from that, Skyscraper Games by Kids aimed to give local kids the chance to go big.

With the help of Drexel’s Entrepreneurial Game Studio and Intel, middle-school students from around the Philadelphia area got a free introduction to STEM and game design. Lee says he wants the program to inspire diverse voices in the gaming industry. 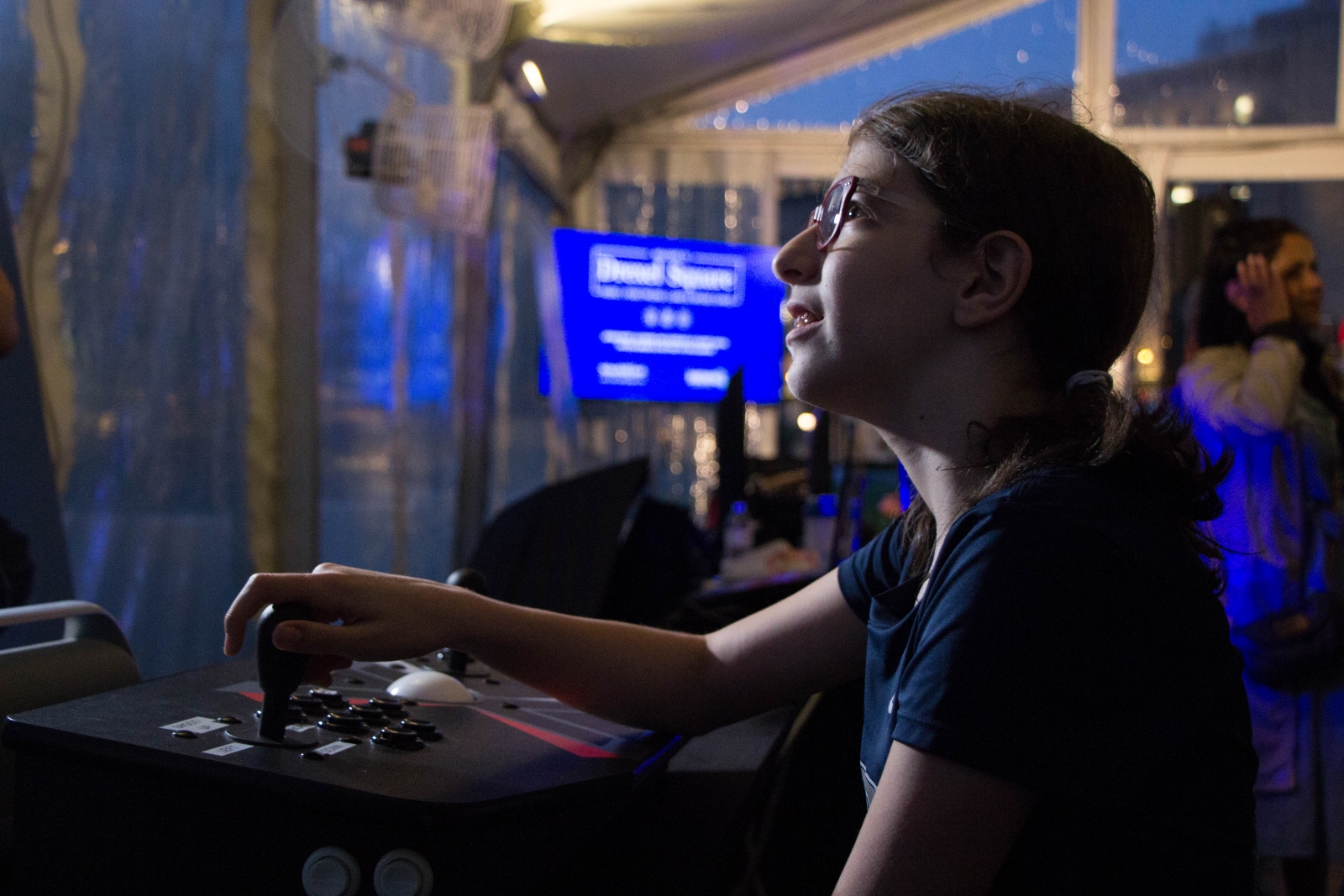 By exposing children who may not have been interested in technology before, they can discover new ways of thinking and possibly ignite a new passion. “My philosophy is diversity leads to more diverse voices in the gaming industry and more interesting games come out of it,” he says.

Playing on a skyscraper

On Monday evening, the students excitedly lined up to play their creations on the outside of the Cira Centre. These games were selected from among those created by students from five schools and had been showcased at Drexel’s ExCITe Center.

Parents proudly snapped pictures of their children at the gaming console. Stephanie Greer, a teacher from The Baldwin School, cheered for her students as they expertly maneuvered the joystick to their game. She says the best part was seeing them go from zero understanding about coding in Python to using the program to complete their game. 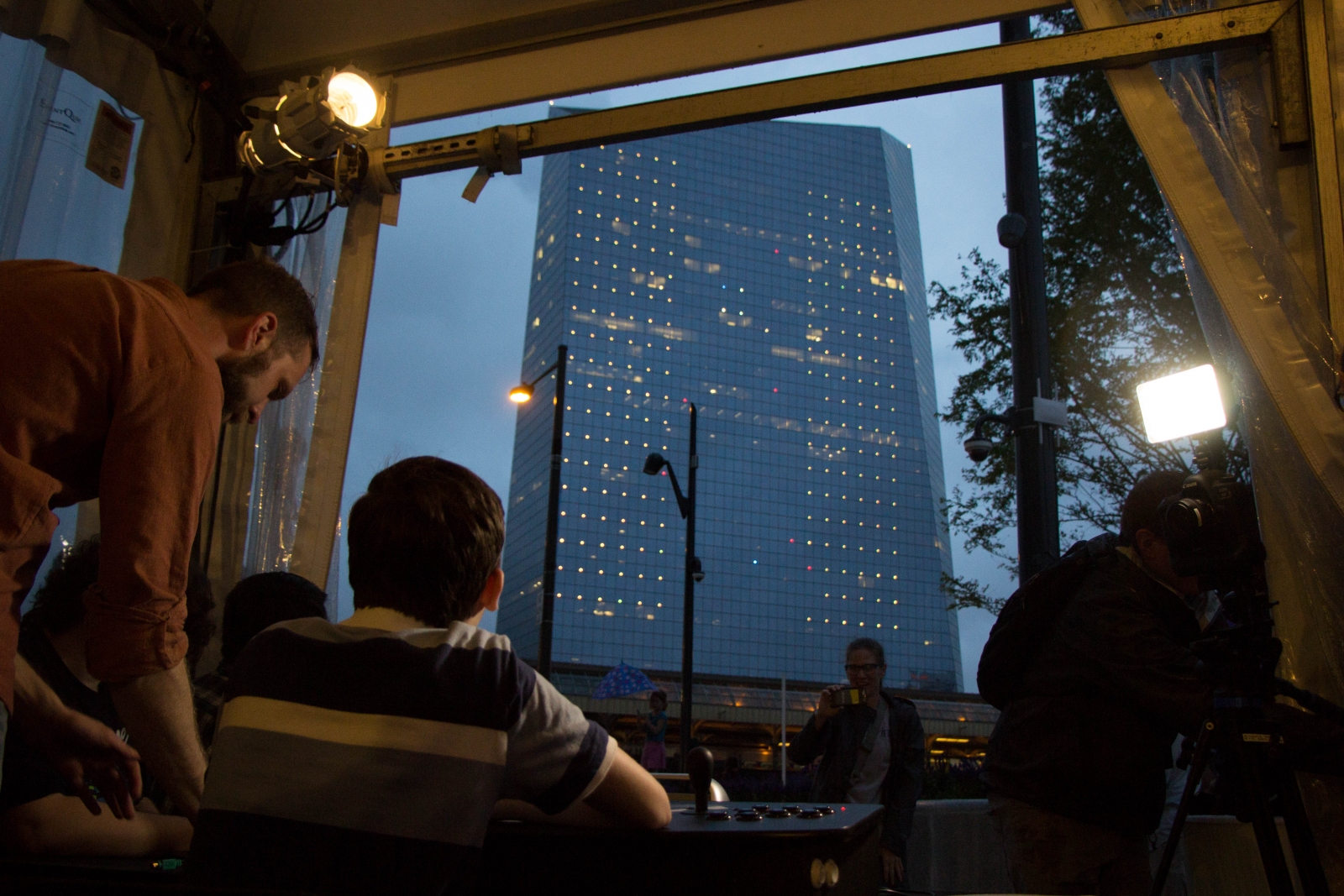 A video game is projected onto the Cira Centre skyscraper across from the newly opened Drexel Square Park at its grand opening in West Philadelphia on June 10, 2019. (Photo by Colleen Claggett)

“I hope my students realize they did something that was tangibly big, especially in collaboration with other people”, she says. The opportunity was an accomplishment the kids could use to inspire them to pursue the STEM field.

One by one, each of the games was played for about ten minutes. The crowd watched in amazement as the scores went higher.

One of the featured games Caterpede was created by a team of five students. Inspired by the vintage game Centipede, the object is to destroy the pixelated caterpillar before it reaches the bottom of the screen. Seventh grader Kush K., from Upper Merion Area Middle School, took part in coding the game and was ecstatic to see his creation displayed.

“Python was very simple to use and it would’ve been much harder to make the code without the program,” he says.

Despite showers throughout the night, the smiles beaming from the kids’ faces proved it was a successful and inspiring event. You can check out the other coders involved in the event here.

For educators or developers interested in designing games for a similar display, lessons and samples are available for download from Skyscraper Games. 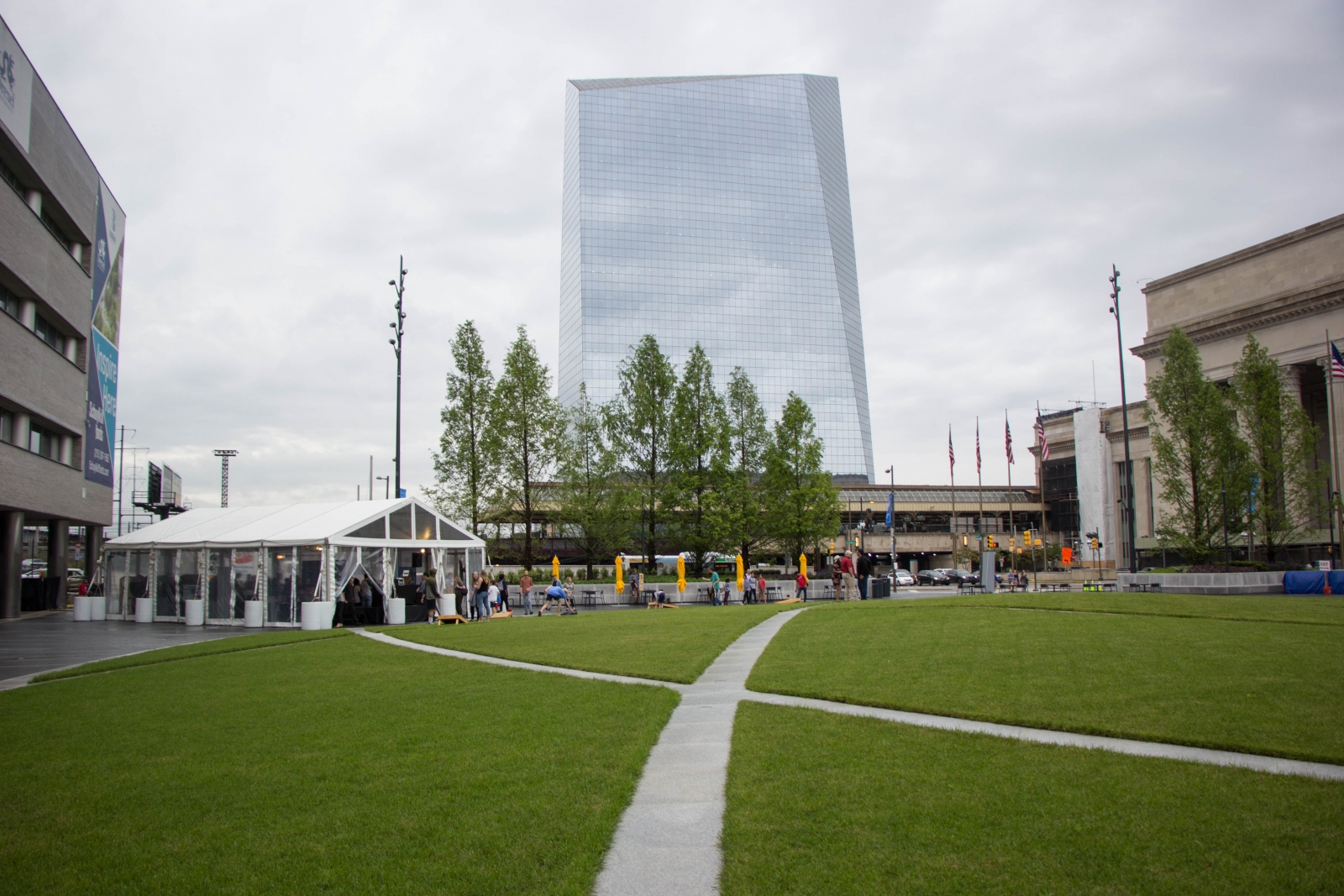 The newly opened Drexel Square Park — the first of a network of parks through Schuylkill Yards — at the northwest corner of 30th and Market streets in West Philadelphia on June 10, 2019. (Photo by Colleen Claggett)

The game demonstration was part of festivities to mark the opening of the newly developed Drexel Square Park by Schuylkill Yards across from 30th Street Station.

Among the square’s 1.6 acres of green space and benches, visitors are encouraged to lounge, socialize and exercise. The park is wheelchair and stroller accessible from ramps located on both sides of The Bulletin Building along 30th Street.

Rose Destra is a MetroKids intern.