Erin Entrada Kelly is a professor of children's literature at Rosemont College in Bryn Mawr, PA. Her book, Hello, Universe, won the 2018 Newbery Medal and this is an excerpt of the acceptance speech she gave this week. It was published by The Horn Book, along with a profile of her.

I entered the world afraid and full of questions.

I was afraid of the dark. I didn’t like to climb trees because I was convinced I would fall. I didn’t scale fences or ride skateboards. There was nothing particularly extraordinary about me. I wasn’t the prettiest girl at school, or the smartest. I wasn’t the quietest or the loudest. I was just a little Filipina girl, born in Kansas and growing up in south Louisiana, trying to find her place in the world.

There were two things that set me apart, however.

The first was this: I didn’t look like the other kids at my school. My hair was black and coarse, my eyes were slanted, and over and over the other kids asked: “What are you? What are you?” It was a question I didn’t have an answer to. There were no Asians in my neighborhood. There were no Filipinos at my school. The kids asked, “Does your family eat dog?” “Do you know the price of tea in China?”

I felt very alone in the world. Sometimes I would wake up in the middle of the night, when everything was quiet and dark, and sit in a corner. There was a clock in my house. I listened to it tick. I felt like the only person on the face of the Earth, and that scared me.

The Scholastic Book Fair was one of the few things I loved about school. My family didn’t have much money, so my choices were limited. I’d circle items with a pen, scratch one out, circle something else. I’d smell the flyer the same way I smelled pages of books. It smelled like home.

The other thing I loved about school was, of course, the library. Thankfully, T. H. Watkins Elementary had one. It was a special treat when Sideways Stories from Wayside School was there, because it was usually checked out. I would imagine what it was like to go to Wayside School. I pretended I was on the thirtieth floor, in Mrs. Gorf’s classroom, watching her turn people into apples. I pressed the worn, dog-eared pages of the book and wondered about the other kids who were checking it out. Who were their favorite characters? What did they like most about it?

I learned to escape through books.

When I read Are You There God? It’s Me, Margaret., I was no longer a scared little girl in Lake Charles, Louisiana. Instead, I was whisked off to the magical land of north Jersey. When I read Blubber—one of my favorites — I was taken to the utopia of Radnor, PA. 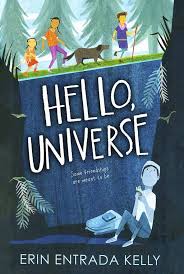 One day — very early on — I realized something: books were nothing more than pen and paper. And I had both of those things. So I started writing my own stories, where things could be just as I wanted them to be.

Most emerging writers polish their craft by emulating some of their favorite books and authors. Not me. Writing came so organically. I filled notebooks. I started a book series about identical twin girls who live in California and go to a school called … Golden Valley High. One of the twins is smart and bookish; the other is a popular cheerleader. I have an exclusive excerpt to share with you tonight.

This is from chapter four of book one, Almost Lucky :

Sindy and Ricky walked in a restaurant called “La Merci.” It was expensive because Rickie’s parents were rich. They had over one thousand dollars. Sindy ordered oysters and a Shirley Temple. Rickie ordered red wine, snails, and French fries. Sindy thought snails were gross. In thirty minutes, the food came. The wine was called Damiano Astino. When they were done, Rickie asked, “Do you want to dance?” Sindy said, “Sure.” They danced to the song, “Gone with the Wind.”

My first hardcover was bound in cardboard. It was a book about two orphans who are best friends. I didn’t have the incredible Lois Adams as my copyeditor then, so the published title is The Two Orpans. These two orpans live in an orpanage, where they “wore tattered clothing.” (I was particularly proud of that line.) The copyright is 1987.

When I got to high school, I listened to girls talk about their dream weddings. Who would be in the wedding party, what kind of dresses they would wear. We played games to guess who we would marry and filled in the blanks of our sign-in books. But I dreamed about the day a publisher would call. Because that’s the second thing that set me apart: My Big Dream.

When I wanted to disappear, when I felt small and insignificant in the world, when I had so many things to cry over that I could never pick just one, I reached for that dream like a security blanket. I wrapped it around my shoulders and used it for warmth.

That’s what dreams do for people.

I’m often asked to describe my ideal reader. And the truth is, I write books for my characters. For Virgil Salinas, who is shy and lonely and always picked last for basketball. Or Valencia, who wants to be the next Jane Goodall, but doesn’t have a friend in the world. In You Go First, the main characters, Charlotte and Ben, sit alone at lunch. I write for them, too. Because I was — and am — all of them.

My greatest wish as a writer is that the person reading my book — or any book, for that matter — feels less alone. Because I know what that feels like. I suspect you do, too. When I was a kid, I didn’t always understand why I was so sad. I would lie awake at night, stare at the popcorn paint on the ceiling, and think about all the people in the world that I would never meet. I’d wonder: what if someone out there feels the way I do, and we could be friends, but I’ll never meet them because they live in another state, or another country? It was a tragic thought, and I would overwhelm myself with it until I cried.

But that’s why we have books, isn’t it? So we can meet those people. Walk in their shoes. See our reflections. So we can discover that we never struggle alone.