Film and TV camps give kids friends, skills and exposure to careers.

An avid athlete and sports fan, Brock Landes of Huntingdon Valley, PA, was only 10 when he signed up for his first one-week overnight camp experience in 2010. Now he can’t wait for his third summer at Play by Play Sports Broadcasting Camp, where he shared meals with the Villanova mens’ basketball team and worked with sports celebrities, pro and college athletes, coaches and professional TV and radio broadcasters. He also enjoyed practicing his commentator skills in the TV studios at NBC-10.

Based on the Villanova University campus, Play by Play’s day and overnight program for ages 10 to 18 is one of seven camps that owners Steven Goldstein and Jeremy Treatman have operated across the U.S. for a decade. Goldstein says the camp is a great experience for all children, and particularly those with disabilities or limited athletic ability. With a background in broadcasting and sports management, he knows that being a pro athlete is only one way to have an exciting career in the sports industry, and that’s a message campers learn at Play by Play.

“Film and TV camps expose children to the variety of careers in the sports and entertainment industries while they make new friends and learn important life skills,” says Michael Chauveau, Director of the American Camp Association (ACA) Keystone regional office.

When Siani Burton, 12, of Springfield Township, PA, wanted to act, write, direct and learn more about the film industry, she enrolled in casting director Kathy Wickline’s Film & TV camp, which has operated on various college campuses throughout the area for 15 years. Wickline also offers a TV Hosting/NewsReporting camp for ages 8 to 15. 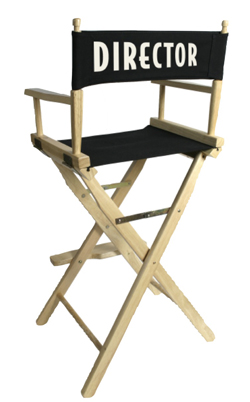 Says Siani’s mother, Tameka Burton, “Siani used to be shy, but Wickline’s camp has given her confidence. Now Siani is a leader and runs for school office. At camp children learn how to voice their opinions in a constructive way, try things, talk out problems, and work out solutions. Everyone has input. They learn teamwork and open communication—skills that will help them when they enter the workforce.”

Delaware children ages 9 to 14 find that teamwork is an essential part of video production at the Rehoboth Summer Children’s Theatre Film and TV camp. Writing and producing their own commercials and a film, kids learn creative skills and terminology while gaining experience on both sides of the camera.

For children focused on acting only for the camera, The Actors Center in Philadelphia offers a camp called “On Camera for Commercials and TV.” Some Actor’s Center alumni have appeared on  national TV commercials and shows. But any child can have fun at a Film and TV camp and grow in ways that last long after the summer.

Brock’s mother, Shari Landes, says, “I noticed a change in Brock after just one week at camp. He came home as a more confident kid.”