Titles about music and art

I’m Glad I Did

It’s the summer of 1963 and JJ Green has defied her parents to wangle a summer job between high school and college at the country’s hottest music-publishing company. She has aspirations to write songs, not become a lawyer like her iron-willed parents. But with a ne’er-do-well uncle already a lowlife in the lowlife music business, JJ starts to learn the ropes (or is it tropes?) as Cynthia Weil sets the ball rolling (and rocking) on an endearing story set in the heart of the pop-music industry, circa 1963. One of the world’s most eminent songwriters (with her husband, Barry Mann), the author knows whereof she writes as she puts JJ through professional, personal and romantic paces in a tightly wound, slightly manipulative but clever plot. Weil hints at the cultural changes to come when some folksinger named Bob Dylan is mentioned, all the more reason to enjoy this throwback to the days when the Brill Building ruled the music biz and the music biz, at least to a certain teen segment, ruled the world. 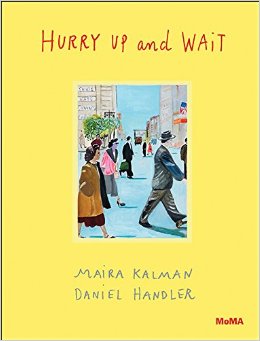 Hurry Up and Wait

Daniel Handler, better known to young readers as Lemony Snicket, and Maira Kalman, well-known artist to readers of The New Yorker, had the run of the photo collection of the Museum of Modern Art to pick 60 photos on which to comment verbally and visually. The collaboration is more anecdotal and whimsical than narrative and plotted, but it shows off the talents of some famous photographers like Dorothea Lange and Garry Winograd as well as Kalman’s watercolors and Handler’s ruminations, like, “I didn’t even know I was waiting. I thought I was just here.” Why this subject? There might be a hint in the authors’ comments where Handler says, “I am always a half hour early for everything,” and Kalman admits, “There is no such thing as waiting for Daniel. He is always ahead of me.” It seems like Daniel had a lot of time to think up his quips waiting for Maira.