Thrust into war-torn London in 1940, the mutant, time-traveling teenage peculiars led by Jacob and Emma exercise theirpowers of clairvoyance and invisibility in menacing encounters that test their emotions as well as their smarts. The faithful crew’s efforts in this sequel to Miss Peregrine’s Home for Peculiar Children, a surprise bestseller two years ago (read a mom review here), pick up where the first book left off, escaping from “hallowgast” and “wight” monsters. London, the capital of “peculiar,” is full of suspense that highlights the character and romance the peculiars develop to meet their challenges. The second of a projected trilogy, Hollow City is another leap of imagination from Quirk Books, the Philadelphia publisher known for offbeat advice books and zombie literature before author Ransom Riggs added his own brand of inspiration, using evocative vintage photographs that are reproduced in the book to illustrate what he has to tell 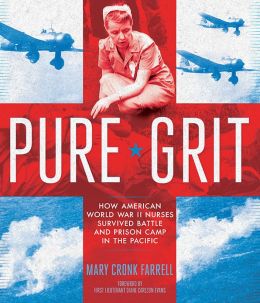 Not a pretty subject, but it is perfect for Women’s History Month. The story of American nurses who cared for American prisoners-of-war — and were themselves prisoners-of-war — in the Philippines shows a side of conflict that is too often buried beneath tales of derring-do, strategy and fighting. Instead, these nurses, without combat training, joined the military to work in peacetime hospitals. They were suddenly thrust into war by the Japanese invasion of the Philippines right after the December 1941 attack on Pearl Harbor. The loss of the Philippines had strategic importance for the Pacific theater, but this detailed account shows the agony of wounded soldiers needing care as the enemy followed its surprise attack with a thorough and ruthless occupation. Capture followed retreat as Japanese cruelty pervades the story; gripping photos combine personal snaps of the book’s subjects with wartime images of blank-faced Japanese soldiers, aerial bombardments and destitution in war-occupied territory. Author Mary Cronk Farrell makes a powerful antiwar statement in a
book that adds nuance, if not a new dimension, to notions of heroism and women’s roles in history.