A Story about Freedom on Independence Mall

The nation’s only museum dedicated to telling the story of Jews in America re-opens in Philadelphia on Friday, Nov. 26.

The new five-story National Museum of American Jewish History chronicles and celebrates the entire American Jewish experience — everything from immigration to Einstein. The museum closed in May to complete a $150 million renovation that expanded its space from 15,000 to more than 100,000 sq. ft.

The core exhibition is thoughtfully designed to excite and educate all ages, even the youngest visitors. “I always look at exhibits and the museum space as being like theater,” says Linda Steinberg, the museum’s director of education. “If it’s done well, it’s a really dramatic experience. People will be excited at the very beginning and will want to continue to go through.”

As visitors move from gallery to gallery, the American Jewish story unfolds chronologically. Along the way, kids can step into worlds gone by. 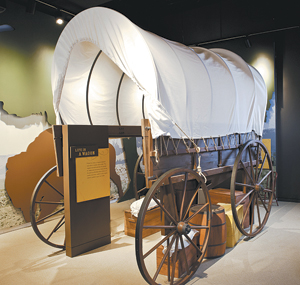 Climb into a covered wagon in the third floor “Westward Expansion” gallery to play with 19th century toys, try on pioneer clothes and listen to a vivid story of a Jewish family’s journey west. Walk into a typical 1950s suburban home on the second floor, complete with a retro play kitchen and a classic TV set that streams vintage clips.

Early museums were built to house objects,” says Steinberg. “In this museum the purpose is to create a living space and a wonderful educational and inspirational experience.”

The experience doesn’t end with a particular person or period of time. Rather, through interactives such as the “It’s Your Story” booth, parents are encouraged to discuss their personal family history or stories. These can be recorded, downloaded and even shared with other museum visitors. 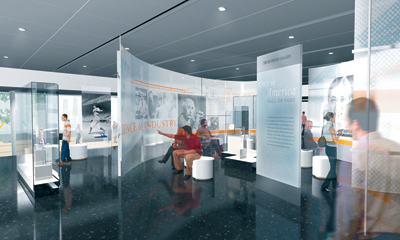 The Only in America Gallery/Hall of Fame on the first floor echoes this theme of transcendent history. Continuously running films on sleek curved screens highlight 18 Jews, past and present, whose contributions have left lasting impressions on society. They include Hollywood luminaries (Steven Spielberg, Barbra Streisand) along with important individuals whose names may be lesser-known to kids: 19th century poet Emma Lazarus, early 20th century Supreme Court justice Louis Brandeis and Dr. Jonas Salk, developer of the polio vaccine.

“I think (Jewish) kids visiting with their parents will come away with a greater understanding of who they are, where they come from and what’s important,” says Steinberg. For non-Jews, “there are so many wonderful things to learn about Jewish contributions that people don’t know,” she says, adding that “the questions asked throughout are relevant for everybody.”

Located on Independence Mall, the museum is in the same neighborhood as the Liberty Bell, Independence Hall, National Constitution Center and other significant American historical attractions.

The building’s design takes advantage of its location. Pathways with windows throughout the museum look out onto Independence Mall. “We want people to be continually aware that this is where the museum is,” Steinberg says. “You really feel the inside looking out, and you feel the outside looking in.

“I have never seen or heard of a more apt place for any museum than this one. Here we have a story about freedom…in the site that represents American freedom,” she says.