How Much Alcohol Is Too Much

The image of women who drink alcohol to cope with the challenges of motherhood pervades modern culture. Blogs and books with names like Reasons Mommy Drinks, Nap Time Is the New Happy Hour and Must. Have. Wine: A Toast to Motherhood attract scads of readers. TV moms from Mad Men’s Betty Draper to Parenthood’s Braverman brood sling full wineglasses around like diaper bags. On social media, “Mommy needs a drink” has become a meme, a punch line. But the rising number of moms who drink to excess — for whatever reason — is no joke.

Get Help in the Delaware Valley

According to the Centers for Disease Control and Prevention, one in eight adult women binge-drink — defined as having four or more drinks at a time — about three times a month, consuming an average of six drinks per occasion. A 2013 survey from PA-based Caron Treatment Centers found that 88 percent of respondents who eventually sought treatment for drinking — 74 percent of whom identified as moms — drank at home rather than out in public, and 70 percent copped to having driven under the influence.

No amount of alcohol is safe for pregnant women.

Those are sobering stats if you drop your kids off at a neighbor’s house for a playdate or allow them to carpool with other moms behind the wheel — especially if you’ve heard too many “It’s five o’clock somewhere” cracks at the morning bus stop or you’ve witnessed casual mom drinking on the sidelines of a soccer game. (Is it water or vodka in that plastic bottle?) What’s behind the seeming increase in blatant mommy drinking?

“Women, especially moms who work outside the home, have many roles to fill,” says Erin Goodhart, Caron’s clinical supervisor of adult primary care for women. “By the end of the day, it can feel like, ‘Where’s my time?’ ” For many moms who drink as a habit, she continues, tying one (or more) on becomes a way to give back to themselves and face the rigors of their lives.

Next page: The dangers of mom drinking and ways to cut down

The dangers of mom drinking 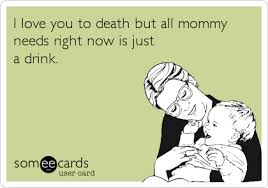 Though the CDC states that most women who binge-drink aren’t alcoholics or dependent on alcohol, the pattern is still dangerous.

“The slide into alcoholism can be quick or so gradual that you might not even notice it,” Goodhart says. Along with alcohol-impaired judgment calls or accidents, binge-drinking causes about 23,000 deaths among young women in the US each year. It also puts women at risk for heart disease; according to a recent study in the Journal of the American Medical Association, consuming two to five drinks per day ups the risk  of breast cancer by 41 percent as well.

In those with a family history of alcoholism, binge-drinking may trigger a genetic predisposition for the disease. Moderation, therefore, is key.

Here are some ways to help yourself stop at one judicious glass (5 ounces of wine, 12 ounces of beer or 1.5 ounces of 80-proof liquor).

Women tend to get drunk faster than men for several reasons: We're smaller and have less body mass, our bodies have more fat than men's and less water to dilute alcohol and we have less of a gastric enzyme called alcohol dehydrogenase, which helps the body rid itself of alcohol. In general, one drink in a woman is equal to two drinks in a man.

Determine why having a cocktail is so relaxing for you. Is it the physical  effect of the alcohol itself? Then drink your one glass when it really matters to you, whether that’s as a pre-dinner cocktail or a mealtime accompaniment. Is it because sipping something special from a fancy glass leaves you feeling pampered? If that’s the case, keep the ritual by dressing up another beverage — say, imported mineral water with a twist of lime in a goblet — after having your designated alcoholic beverage du jour.

Delay drinking. When you’re out with friends or at a party, pace yourself by drinking a nonalcoholic beverage first, accompanied by food. If you have a stiff drink on an empty stomach, the alcohol is apt to make a beeline for your brain. There, it zones in on the frontal lobe — the judgment and reasoning center — to weaken your one-drink resolve.

Treat alcohol like dessert. Just as you wouldn’t sit down with a whole box of cookies, don’t order wine by the bottle when you’re eating out. Go with a glass instead. At home, pour yourself a glass, then cork the bottle and put it away. Keep in mind that there’s a tendency to fill wineglasses three-fourths full, which can amount to 8 to 10 ounces — giving you two or more servings in just one pour.

If you need more incentive to cap the so-called “mommy juice,” Caron’s survey has a potent one: 83 percent of moms questioned said that once they stopped drinking to excess, they experienced more emotional closeness with their kids.

Sandra Gordon is an award-winning freelance writer and author of eight books.