Wheat-free eating is the diet of the day. Grain Brain and Wheat Belly are just two of the bestsellers that tout cutting carbs. Celebs from Miley Cyrus to Chelsea Clinton join scores of regular folks who publicly eschew wheat, grain and gluten in the name of weight loss and general well-being. As more and more parents hop on the Paleo or gluten-free bandwagon, the kids they cook for are often swept along for the ride — a fact, local experts worry, that may put growing children at risk of nutritional deficiencies.

Eating at Home with
Gluten Issues

Nicole Harahan of Downingtown, PA has a 3-year-old son with celiac disease. Since his diagnosis, Harahan has changed the way she shops for her family: She now primarily stays around the perimeter of the grocery store. “I buy a lot of vegetables and fruit and have eliminated the boxed stuff,” she explains. In addition to shopping differently, Harahan replaced many of her cooking utensils with stainless steel to avoid gluten cross-contamination in her own kitchen

Tara Dostalik, a mom of three from Glenmoore, PA, has a gluten sensitivity and estimates that she feeds her family gluten-free 75% of the time. “There’s still plenty to eat,” she insists. She found a gluten-free mix similar to Bisquick that she uses to make pizza dough, muffins and pancakes for her family. However, she finds that boxed foods labeled gluten-free are not necessarily healthy choices. “Generally the more processed, the less healthy it is,” says Dostalik, who is also a holistic health coach.

Eating Out with Gluten Issues

“The easiest way to eat out on any kind of special diet is to go plain,” advises Langer. Adding sauces and dressings means added ingredients that may present a problem, so simple, easily identifiable foods are best.

Because the general population seems to underestimate the severity of celiac disease, it may be helpful to use the word “allergy” with your server (though celiac is an autoimmune disease and not an allergy). Be open with your server about what you need so you can be assured that you will get a safe meal.

Dr. Verma recommends calling ahead to the restaurant when it’s not busy and asking to speak to the chef about your specific concerns. He will tell you if what you need is possible or not, and this may help to avoid kid disappointments later at the restaurant.

“These diets do promote greater fruit and vegetable intake and less processed foods, but they eliminate whole natural foods that are also very healthy for children,” says Michelle Reed, RD, LDN, a clinical dietitian at Nemours/Alfred I. duPont Hospital for Children in Wilmington, DE.

This regimen eliminates foods that contain the gluten protein, found most often in grains like wheat, rye and barley. It’s important to note that there are several conditions that require a gluten-free diet, the most serious of which is celiac disease, an autoimmune ailment that affects many different organs. Other types of gluten intolerances range from a low-level sensitivity to a full-blown allergy to the protein, says Dr. Rita Verma, director of the Center for Celiac Disease at the Children’s Hospital of Pennsylvania. “For these people, the gluten-free diet is not a fad; it’s their medicine.” However, says Reed, “There’s no research to back eliminating gluten from children’s diets if it’s not medically necessary.”

If you think your child has a gluten intolerance, have him tested before removing the protein from his diet, says Dr. Verma. For parents who do decide to cut out gluten for the whole family, she suggests getting a doctor’s advice and working with a dietitian to make sure kids get the proper nutrients. Otherwise, says Lori Langer, RD, a registered dietitian and licensed nutritionist at Live Well Nutrition Counseling in King of Prussia, PA, “In an effort to become more healthy, you may actually be making yourselves less healthy.” 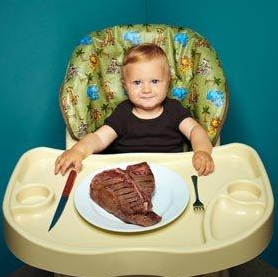 Adherents consume only meats and food found during the Paleolithic era; no grains, dairy, refined sugar, potatoes and legumes.

“There are no advantages but significant risks” for children on a Paleo diet, says Reed. “You rapidly lose options for getting nutrients if you start cutting out whole food groups.”