As both the Girl Scouts and Boy Scouts celebrate recent 100th anniversaries, today’s scouts enjoy the same values that their parents grew up with — including honesty, community and trustworthiness. But 21st century scouts can also check out scouting news online and earn badges in contemporary interests such as jet skiing and environmental justice.

Exhibits in Philadelphia and Wilmington, DE celebrate the 100th anniversary of girl scouting.

At the National Constitution Center, 525 Arch St., Phila., On My Honor: 100 Years of Girl Scouting features nearly 100 artifacts, including vintage badges, uniforms and an original copy of the first Girl Scout Handbook. The exhibit is open through Dec. 31. Tickets are free with admission.

At the Delaware History Museum, 504 N. Market St., Wilmington, A Circle of Friendship United by Ideals highlights the history of Girl Scouts in Delaware. The exhibit, open through June 16, is filled with objects and photographs from the Girl Scouts of the Chesapeake Bay Councils collection of memorabilia.

Celebrating their 100th birthday this year, the Girl Scouts have evolved with the times. Girls today don’t even need to join a troop.

“We have a type of Girl Scout called ‘Juliette,’ who is not affiliated with a troop, but she receives all our materials, and based on her schedule and other priorities in her life, she weaves Girl Scouts into her other activities,” says Natalye Paquin, CEO of the Girl Scouts of Eastern PA (GSEP).

A Girl Scout’s agenda these days might include the Destinations program, through which girls can go to Costa Rica and New Zealand to explore underwater science. Or, she could try the Environmental Justice program and take part in any number of offerings focused on the environment and how to bring that to their communities.

Camping remains a timeless program that’s still popular. In fact, GSEP has 2,400 acres of land and nine campsites, where 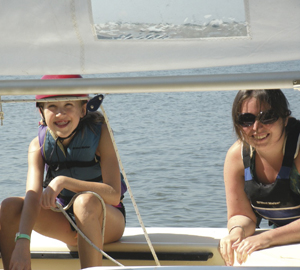 “children can stay close to the earth, explore open spaces and take advantage of our outdoor programs,” says Paquin.

New programs and flexible options have kept the Girl Scout membership strong. GSEP boasts 41,000 members in its nine-county area, aided by 15,000 volunteers. Nationally, membership increased 4% in the last year to more than 3 million.

Boy Scouts of America has weathered a decline in enrollment. “We just recently had our first month of membership growth in a number of years in the DEL-MAR-VA Council,” says Tom Trafton, the Council’s director of field service.

In order to attract more kids, exciting new programs have found their way into the scouting handbook. For example, the jet ski program is a fun way to keep older boys interested in scouting.

For boys who prefer speed on dry land, a dirt bike and 4-wheeler program is also new. Many of the traditional activities, including the Pinewood Derby and Raingutter Regatta are still going strong today. Camping and community service activities remain important components of scouting. Today, entire families are invited to take part. “More now than ever, scouting is encouraged and developed as a family type of program where boys have an opportunity to do activities with their moms and dads and brothers and sisters,” says Trafton.

The DEL-MAR-VA chapter has also reached out to the Hispanic community, adding a bilingual staff member. “We are trying to be innovative in how we encourage (Hispanic) kids to participate and how we devise a program to get them out of the urban setting and into the woods a little bit,” says Trafton.

The highest honor for Girl Scouts is the Gold Award and for Boy Scouts is Eagle Scout. For Darragh Dandurand Friedman, from Philadelphia, and Nicholas Cincotti, from Millville, DE, these honors opened up doors to their futures.

Friedman, 20, is completing her sophomore year at Temple University. Chosen as a Young Woman of Distinction, the highest national honor given to a select few Gold Award winners, she has enjoyed many new experiences. “I’ve been speaking at events, tutoring, helping host workshops, writing, filming and growing!” she says. “I feel like (Girl Scouts leaders) are giving me such unique attention and mentorship.”

“I came out of boot camp as an Airman First Class, which usually takes two years, and it also meant a higher salary,” explains Cincotti. “The military sees that the individual has already displayed leadership and the bearing to better himself in the military.”

Terri Akman is a contributing writer to MetroKids  and a South Jersey mom of three.