Gift Books: In with the Old!

The latest in holiday pop-up books combines impressive paper engineering with a comic-book sensibility brought to serious classic literature. Sam Ita’s The Odyssey (Sterling, $26.95, ages 8 & up) gives a faithful version of Homer in a cartoon style that conveys the supernatural aspects of Odysseus’s adventures and adversaries. It’s the closest thing to 3-D you can get without funny glasses.

► Related article: Find a book that fits your child. 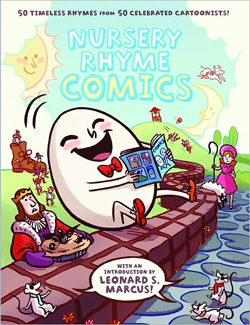 In other new books, the old also comes around again as new. Nursery Rhyme Comics (First Second, $18.99, ages 3 & up) pairs familiar nursery rhymes with familiar artists to produce new views of old subjects. The nursery-rhyme format is a good test of the distinctiveness of cartoonists’ styles. Roz Chast is unmistakable in her version of the “There Was a Crooked Man,” portraying a New York skyline and ditsy apartment as the setting. David MacCaulay gives “London Bridge Is Falling Down” a vertical architectural look, while Mark Martin’s “Little Miss Muffet” puts a nice sheen of sophistication on the childlike drawings. 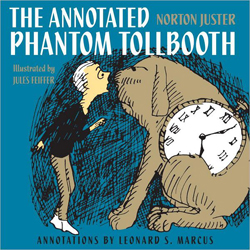 A 15th-anniversary edition of Norton Juster’s The Annotated Phantom Tollbooth (Knopf, $29.99, ages 8 & up) includes the original meanderings of Milo and original drawings of Jules Feiffer, with elaborate marginal comments by Leonard S. Marcus, some of which are unintentionally humorous on their own, like: “Embedded within The Phantom Tollbooth is a critique of the depersonalization of modern city life….” 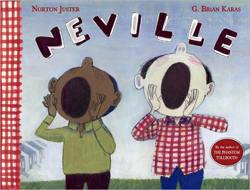 Juster has found another way to celebrate the anniversary with his new book, Neville (Schwartz & Wade, $17.99, ages 4-8), whose simpler drawings by G. Brian Karas tell a charming but shorter and simpler tale of adjusting to new neighborhood. 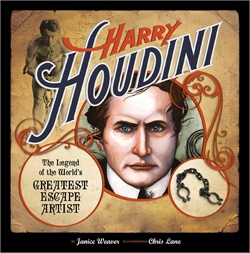 Harry Houdini: The Legend of the World’s Greatest Escape Artist (Abrams, $18.95, age 8 & up) recounts the old-fashioned entertainment of vaudeville, where Houdini made his reputation as the world’s greatest escape artist. With elegant illustrations and artifacts from his life, including playbills and handcuffs, author Janice Weaver and illustrator Chris Lane make Houdini both larger than life and just another person earning a living in the most impossible way. 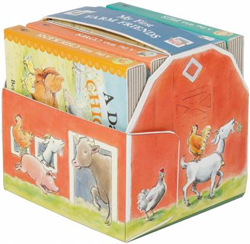 My First Farm Friends: Books in a Barn by Betsy Wallin (Storey, $18.95, ages infant-3) is a nice package of four hardboard books, play barn, and four cardboard animals for directed play about outdoor life without the mud  — like Farmville for the pre-Internet set.

Frank Lipsius is a contributing writer to MetroKids