Patrick Benson’s illustrations of Herman Melville’s Moby-Dick (Candlewick, $12.99, ages 9-12) show how the tough-to-read original can become a powerful story that reflects its period but reaches across time to modern readers. The line drawings evoke the 19th century and lonely challenges of a big sea. The text chooses Melville’s words from what presenter Jan Needle calls “the enormous novel” in which “much of the original is long and rambling, even obscure, while other parts are wonderfully exciting.” He did a very good job of keeping the latter and jettisoning the former. 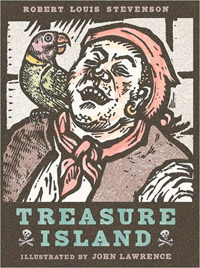 Even when using the entire original text, a tale can still be transformed especially when the writing is as fresh and personal as Robert Louis Stevenson’s Treasure Island (Candlewick, $24.99, ages 9-12). John Lawrence’s illustrations freshen the text with woodcuts in large blocks of primary colors on nautical themes and rough sailor images.

Rodney Matthews explains in a short preface that his first illustrations of Alice in Wonderland were as a 6-year-old after seeing the 1951 Disney movie. A new movie is back, which Disney accompanies with a small rewrite of the story in its own book (Disney Press, $16.99). 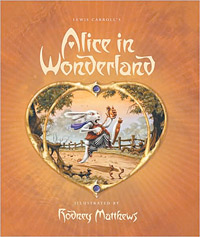 In his more ambitious Alice in Wonderland (Templar, $24.99), Rodney Matthews takes on the original in large scope with cinemascope colors, showing that he has let the story germinate and inspire him to heights of color and drawing he could only have imagined the first time. It comes boxed in a bejeweled slipcase that is no more grandiose than the sumptuous illustrations and breathtaking colors warrant.

Its extraterrestrial overtones add a modern sensibility without detracting from the obviously inspiring original. And that may just be a good definition of a classic — inspiring, whether to a reader, adapter or illustrator.