Call it “entitle-mania”: The average American kid has more stuff, wants more stuff and gets away with fewer chores around the house than any previous generation. This trend is not limited to the affluent — it cuts across all socioeconomic classes.

As parents, most of us haven’t made it a priority to train our children to roll up their sleeves and dig into daily household drudgery. The fallout? Many children today feel entitled to all the benefits of family life — without giving much back.

This is a pickle we’ve created. Many parents feel that their children are spoiled to some degree, from “somewhat” to “excessively.” Most are in the “somewhat” category. These children pout and drag their heels, but eventually do some chores. They collect goodies such as clothes, electronics and athletic gear. Once they reach the teen years, the average kid spends $100 a week, regardless of family income level (Teen Research Unlimited, October 2003).

Kids being kids, they’ll use their verbal and emotional talents to try to persuade parents they have to have something and, likewise, to get off the hook with family jobs. Compared to parents of the 1950s and 1960s, we place more of a value on our children’s feelings than on strict obedience.

When we insist that they pitch in or we deprive them of their wants, they tell us we’re meaner than other parents, that “everybody else has one” or the big showstopper: “My friends feel sorry for me.”

Highly indulged kids are not happy kids. They typically have a false, inflated sense of importance, which is inversely related to genuine self-esteem. Happy kids work toward achieving goals. Research shows that a strong sense of self develops when kids buckle down and master challenges.

Indulging children is too easy. What’s hard is sticking to our guns and making it a priority to teach children the skills they need to delay gratifi cation, to budget resources, and to be contributing members of the family.

Chores: A Way of Life

When parents build chores into the family routine, they are helping their kids build character. This character development instills a sense of responsibility, an expectation to give back to the community of home and a work ethic. These behaviors — desired by all parents — are the opposite of “spoiled rotten.”

But here’s the reality: Most children don’t do chores with smiles on their faces. Getting kids to help out around the house takes years of training, starting when they are toddlers picking up their toys, progressing to youngsters clearing dinner dishes, and leading to teens who feel obliged (albeit begrudgingly) to participate in household tasks.

Many parents know better than to indulge their children, yet it still happens. Here are some of the main reasons why:

■ Demographics. Parents are having fewer children and having them later, which means less divvying up of resources.

■ Slippery slope. Kids love stuff, parents love their kids, so they fall into the bad habit of giving them stuff because they love to see those faces shine.

■ Weak boundaries. Without firm interpersonal boundaries, parents absorb too many of their kids’ feelings and can’t tolerate having their kids mad at them.

■ Romanticizing the past. Clinging to unrealistic illusions about home and hearth, parents want everything to be perfect and are unable to work through unpleasant hardships.

■ Guilt. Parents give kids stuff instead of time.

■ The “busy” excuse. Kids are too busy and so are their parents, and they never get around to making chores a priority.

■ Overidentification. Parents want their children to have what they didn’t have in their own childhoods.

■ Pure oops. Parents got into the habit of giving their kids stuff and didn’t realize where all those “gimmies” would end up.

■ Path of least resistance. It’s easier for parents to do the work themselves or hire it out than to make kids do it.

■ Retail therapy. Parents are having a bad day, so they give themselves a boost by treating their kids and enjoying making them happy.

■ Misguided self-esteem. Parents feel more successful when they provide their kids with more.

■ Our material world. Almost everyone is tempted to keep up with the Jones.

The more that families make household duties a way of life for children, the more easily kids comply. But even then, children might show some attitude; parents might have to ask more than once; siblings might argue over whose turn it is; and there might be some tiffs and theatrics and a hard lesson or two. We may feel the urge to call our kid a “spoiled brat,” but losing our cool is counterproductive, so it’s best to stay calm and firm — and keep nagging to a minimum.

With small children, parents can work side by side and offer other support. With tweens, parents can say, “You don’t like being badgered, and I don’t like your heel-dragging. Let’s make a deal and figure out when this will be done.” Link privileges to responsibilities: “After you clean your room, we’ll pick up Jason and go to the park.” Later, that can translate to access to car keys.

While parents should expect 100 percent compliance on family responsibilities, they shouldn’t expect a joyful response — or a perfect job. When, what and how the chores get done is negotiable; whether they will is not.

What can parents do when they find themselves with a child who does zilch and expects a lot? For parents needing to initiate new and better habits for defiant kids, here are some tips:

Avoid threats and ultimatums. “Do it or else” statements are like red flags in front of a bull and are more likely to arouse defiance instead of cooperation. A negotiated deal and an ongoing, working alliance will always be more effective.

When children have a pattern of not doing as asked, parents can announce a new policy. Let them know that you’ll remind them once and if they don’t comply, they’ll owe you “payback of time plus additional interest time” with another chore.

If the child protests the task of emptying the dishwasher, you can say, “I expect you to do it in the next 20 minutes. You’re right, I can’t make you. It’s your choice, but you’ll owe me the time so it’s in your best interest to play by the rules.” Then leave the room, because it’s hard for kids to buckle in a battle.

Positive strategies work better than punishment. Once in a while, we may have to punish kids, but a steady stream of negative threats doesn’t inspire cooperation. If we’ve already consented to something, even tacitly, it’s dirty pool and coercive to yank permission at the last minute. Often, we pull the big guns out of anger, not because they work.

Flip the language and set up incentives. Giving the child plenty of notice, we can make an upbeat offer like, “After you make your bed, we can get out the Legos.” Think of it as translating from Greek to Italian. Instead of “Do X or you don’t get to do Y,” it’s “First you do X, and then you get to do Y.”

Steer clear of enticing a child with something highly desirable and out of the ordinary, such as a special birthday celebration, a car or a new puppy. This is almost always a bad idea, since parents as well as children buy into special things emotionally. Parents then have grave misgivings about withdrawing the offer if the child isn’t successful. Parents should never create situations (promises or threats) they’re not willing to follow through on, since it erodes their credibility. And they shouldn’t shoot for a goal beyond the child’s reach, since it sets the child up for failure.

The best way to kick-start a new habit or a new regime is to break it into chunks and use small rewards. Determine your “new program,” preferably with input from the child. Then, supply small rewards for small steps in the right direction, which are easily earned and easily taken away.

For example, for every day’s completion of chores, the child might earn TV or cell phone privileges. Third, adapt the program as needed, since we rarely get it exactly right from the get-go. A new habit takes time, repetition and rewards along the way in order for it to take root. Emphasize the positive, cheer your kids’ success, and say little — no threats, no finger wagging — when they fail.

Tell children that you expect them to do chores, no ifs, ands or buts. Part of a parent’s job is to prepare children for the world, and the way of the world is: First you do your work, then you get your reward or privilege. However, terms are negotiable. Kids can be allowed some say on which chores, which deadlines and which rewards. This input can mean the difference of night and day in their attitude, because the kids buy in to the task through their participation.

Although it’s hard to give more goodies to an indulged child, it may be necessary. The child’s new regime, whether it’s sleeping in their own bed, doing dishes or walking the dog, is burdensome and bad news to them. That’s why we override their resistance (and ours to fi ghting) with the goody. If necessary, parents may need to revoke privileges previously given and make them contingent on task completion, and they should expect protest.

If it becomes clear in a few weeks that the plan isn’t working, call it off and come up with something else. If the child isn’t going to succeed, there’s no reason to keep going. Consistency is desirable once you have the new routine under way. Good parenting involves consistency and stability, but it also requires adaptability and innovation. In this instance, it’s perfectly okay to say to the child, “Look, what we’re doing isn’t working. We need to adjust the plan to get back on track.”

Don’t be discouraged if things get worse before they get better. Most indulged kids are very good at wearing parents down. Because tantrums have worked before, kids will not only keep at it, they’ll double their intensity — following parents into the bathroom, telling parents they hate them, threatening to go live with Aunt Betty. 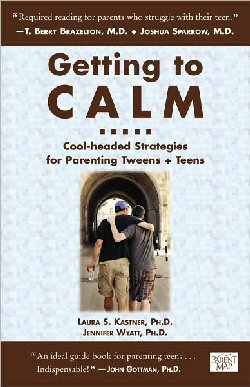 This is called “extinction surge.” Their freak-out is an honest outburst, as if to say, “How dare you change the program on me like this!” The surge is their last-ditch effort to weaken the parents’ resolve and express their strong emotion or frustration. Withstanding their wrath can be awful the fi rst time, but behaviors will improve once the child knows parents mean business.

The later we take action, the more inconvenient it will be, but it’s never too late! In the same way that brushing teeth is not up for debate, kids can acquire new habits and be trained, for example, to get up from the table and do the dishes. Routine is a beautiful thing.

This article is an excerpt from Getting to Calm: Cool-headed Strategies for Parenting Tweens and Teens ($19.95, ParentMap Books) by clinical psychologist Laura Kastner, PhD, and writer Jennifer Wyatt, PhD.