Fast-and-fun décor, food and games for a home Halloween party. 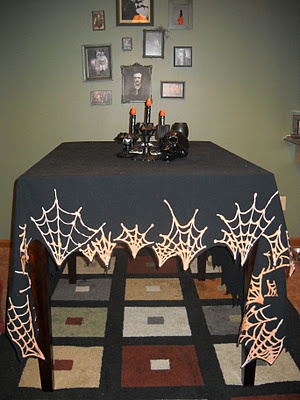 Cut jagged edges around a black sheet or swath of fabric, then draw spiderwebs to fit the zigzags with a Clorox bleach pen. (Supervise kids closely to make sure they don’t get the bleach on anything but the fabric.) The bleached-out design turns a happy, Halloweeny orange, like on this spread from Lovelymtnlife.blogspot.com.

Superspeedy alternative: For younger kids to whom you shouldn’t entrust a bleach pen, roll out some butcher’s paper and have them draw a Halloween-themed spread with crayons and markers. 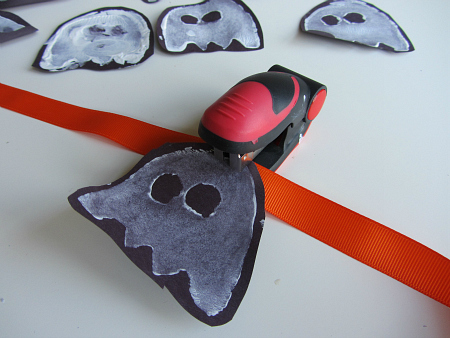 Using a halved uncooked potato, scoop out two eyes and cut a jagged bottom. Invite the kids to dip the ghostly potato in white poster paint, then repeatedly press the potato on a sheet of black construction paper. Cut out the ghost shapes, punch a hole at the top and string them on orange ribbon for a boo-tiful garland. These inspiration pics are from Notimeforflashcards.com,

Want to ghost-host two separate Hallow-bashes: one for kids, the other for grownups? See our tips for doing so here.

Supereasy alternative: Cut bubble wrap into ghost shapes, dip into the white paint and press the wrap onto black construction paper. Lift the paper to reveal the ghost prints, then let the kids pop the painted bubble wrap. 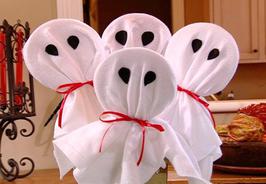 Cover jumbo-sized lollipops with white felt squares, then cinch and tie it all with colorful ribbon. Glue on black felt eyes and stick a host of ghosts into a foam-lined basket in the middle of your trick-or-treat table. This example's from Interiordesign4less.blogspot.com.

Superspeedy alternative: Wrap smaller lollies in squares of orange tissue paper. Twist a black pipe cleaner around the stems and let the kids draw funny faces on each pop with a black marker. 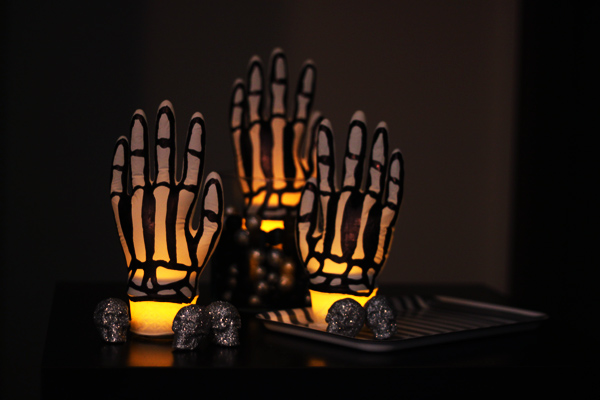 With markers (permanent ones work best), have the kids decorate a pair of disposable latex gloves as spookily as they dare. (Use these skeleton hands as a template, or try green fingernails, fake scars, rings on each finger, a cobweb. . . .) When they’re finished, the kids can wear the gloves or you can stand them over a flameless LED tea light and let them glow in the dark, as Formalfringe.com has done here. 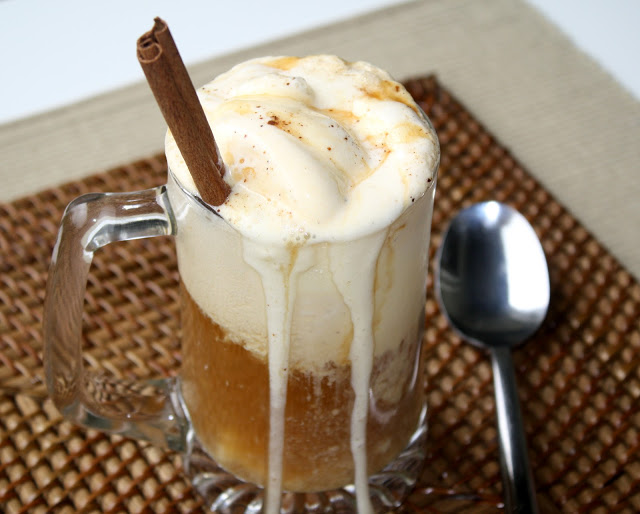 For an extracold kick, top with vanilla ice cream and drizzle with caramel sauce, as Thatssomichelle.com has done here; it’ll taste like a caramel apple. 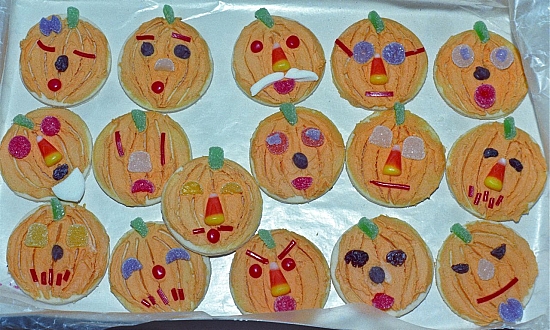 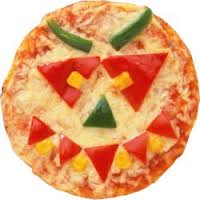 Sprinkle grated cheddar cheese onto an English muffin half (turn it into a pizza by spreading a layer of tomato sauce first). Make a jack-o’-lantern face using cut veggies and condiments — green and red pepper shapes, corn kernels, black olives. Heat the muffin in the oven until the cheese melts. 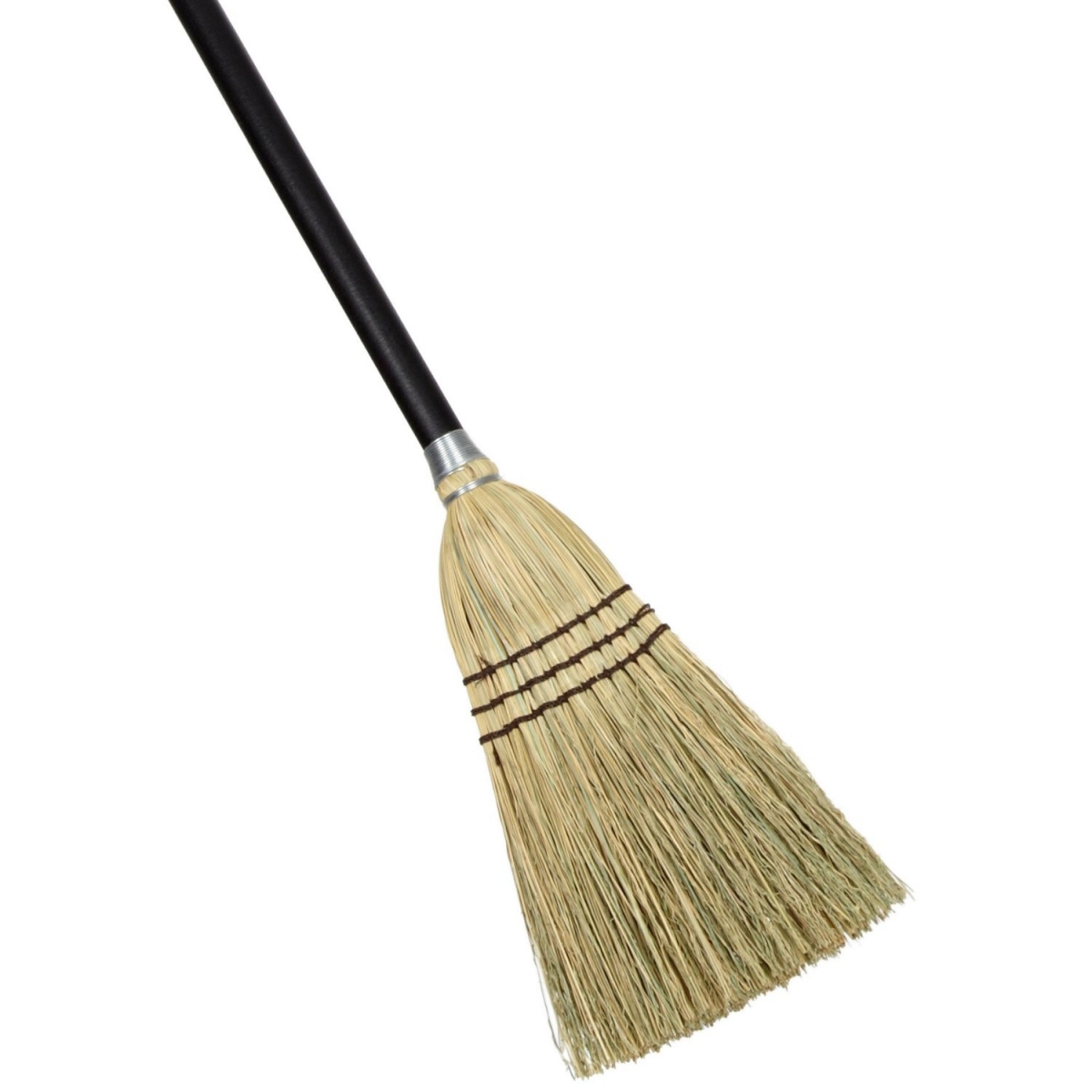 It’s easier than Quidditch! Have everyone stand in a circle. As you crank the Halloween tunes, the players pass a broom around the circle. When the music stops, the player holding the broom is out and takes a seat outside the circle. Continue playing until only one player is left. 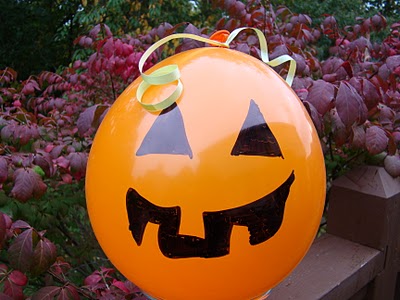 Inflate and tie the end of an orange balloon. Draw on a jack-o'-lantern face with a black permanent marker. Cover the balloon with shaving cream. One child holds the balloon while another shaves “old Jack” with a Popsicle stick “razor.” Take turns and repeat the process. Whichever partner shaves Jack faster without breaking the balloon wins.

Tania Cowling is an author, former early childhood teacher and mother. Go to Taniacowling.com to see her books online.