If you loved James Cameron’s 2009 film Avatar, you are in for a treat. Cirque du Soleil’s new touring show “Toruk – The First Flight” stops at Philadelphia’s Wells Fargo Center Mar. 8-12.

“Toruk – The First Flight” acts as a prequel to Avatar and is set 3,000 years before the events depicted in the movie. Without any humans in sight, the audience learns about ancient Na’vi life through three teenagers, following their journey to save the sacred Tree of Souls and all of Pandora from a natural disaster. According to prophecy, a pure soul must rise among the clans and ride the terrifying Toruk, a dragon-like predator, to accomplish this feat. 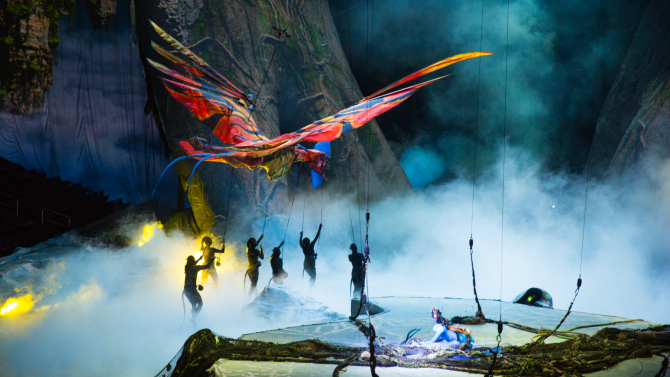 Sam Worthington (Jake Sully) rode the frightening Toruk for the sixth time in Na’vi history in Avatar, but in “Toruk – The First Flight” the fearless teens Ralu, Entu and Tsyal take on the seemingly impossible task for the very first time.

Prior to the show, audience members can use the app to explore Pandora, learn about Na’vi culture, view photos and videos of behind-the-scenes footage and listen to the show's soundtrack. During the performance, the app will buzz at times to instruct users to point their phones toward the stage.

The app is free in the Apple Store and, while it is not necessary to enjoy the show, the more people who have downloaded the app, the more the audience will feel like a part of the action.

This captivating display of science fiction, fantasy and nature is a nod to Cameron’s beloved film, but it also has the potential to stand alone. Those who have seen Avatar might have more insight into the themes and easily recognize aspects like the Tree of Souls and Toruk. However, since Cirque du Soliel’s show is a prequel, no prior knowledge of the movie is required.

Tickets to “Toruk – The First Flight” are on sale now. To learn more about the performance, visit https://www.cirquedusoleil.com/toruk.