Visit these historical destinations in the Delaware Valley this February 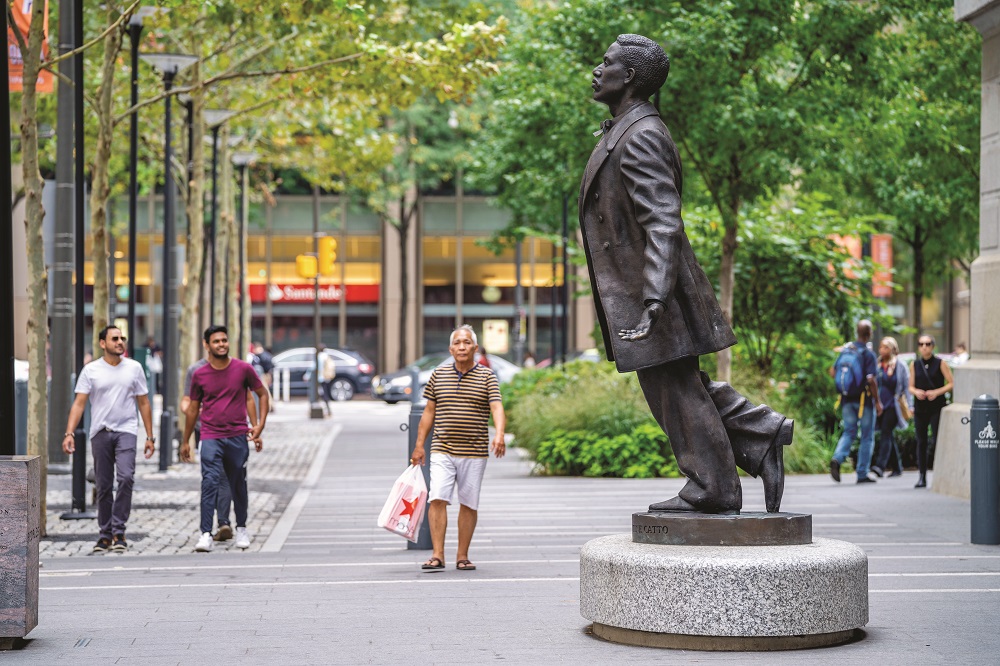 In a city of more than 1,500 public statues, the Octavius V. Catto Memorial to a 19th-century civil rights crusader is Center City’s first statue of a specific African-American. Catto led efforts to desegregate the city’s streetcars, fought for equal voting rights and worked as an intellectual and teacher. On October 10, 1872, the first Election Day African-Americans could vote in Pennsylvania, he was shot and killed on South Street. Sculptor Branly Cadet created the 12-foot-tall bronze memorial, which features Catto in a powerful stance, walking toward a granite representation of a mid-19th-century ballot box.

Every February for nearly 50 years — since 1976 — Black History Month celebrates and recognizes African Americans’ achievements and talents, and acknowledges hurts and wrongs, throughout the past and present.

There’s perhaps no better place to explore and celebrate Black History Month than Philadelphia and its surroundings — a region rich in history with the founding of our nation. Discover five places — many of them iconic, others relatively unknown — where families can visit and expand their understanding.

Liberty Throughout the Land

The Liberty Bell is one of the most recognizable symbols of American freedom. At Liberty Bell Center, visitors can learn about the bell’s direct connection to African American history — along with fun facts about its size (it weighs 2,080 pounds), its famous crack and its original use atop the State House (now known as Independence Hall).

The bronze bell’s inscription reads “Proclaim Liberty Throughout All the Land Unto All the Inhabitants Thereof,” a phrase taken from the Bible’s book of Leviticus. This verse became a rallying cry for abolitionists striving to end slavery — just as the bell became a symbol of their movement.

Beginning in the late 1800s, mayors and city officials across America requested the Liberty Bell travel by rail for display in their cities as a way to help heal the divisions among people following the Civil War.

The beloved bell, and its message, continued to inspire the women’s suffrage and Civil Rights movements, and it continues to be a source of inspiration for visitors of all ages and backgrounds today.

The President’s House — and Its Paradox

The open-air “President’s House” exhibit includes the layout and structural remains of President George Washington’s residence. Although the house was demolished in 1832, the foundation is still embedded in the ground. Panels and videos bring a contradictory story to life: As our nation’s first president guided a young, experimental country, his household included Black slaves.

The house is part of the National Park Service (NPS) complex including Independence Hall — where visitors can consider that the phrases “All Men Are Created Equal” and “We the People” were adopted.

As the NPS website explains, “The President’s house in the 1790s was a mirror of the young republic, reflecting both the ideals and contradictions of the new nation.” This exhibit, “The President’s House: Freedom and Slavery in the Making of a New Nation,” is sure to prompt discussions.

Who was Octavius Valentine Catto? This question has many answers.

After graduating as the 1854 valedictorian from the city’s Institute for Colored Youth (which would become the historically Black college we know today as Cheney University), Catto became one of Philadelphia’s most influential Black leaders of the Civil War era. He dedicated himself to African American social justice issues such as desegregating city streetcars and advocating for equal voting rights.

Catto was also an athlete who played for Philadelphia’s first successful Black baseball club. The Civil War further sparked his activism. Catto, along with Frederick Douglass and fellow Black leaders, formed a committee to recruit Black men to fight for the Union—and emancipation. Catto himself joined the Pennsylvania National Guard, and he became the highest-ranking African American in the military at the time.

Tragically, he was assassinated at the age of 32 on Oct. 10, 1871 — the first election day in which Black men could participate. He’s now memorialized in bronze, larger than life at 12 feet tall, striding toward a ballot box to cast his vote.

A First for African Americans

A museum dedicated to preserving and celebrating Black culture, the African American Museum in Philadelphia itself made history as the very first museum of its kind in a major American city. Founded in 1976, this bright, colorful and engaging museum offers activities for visitors of all ages.

The Children’s Corner, designed for kids ages 3 through 8, is a hands-on area where kids can “meet” Philadelphia’s youngest residents of 1776 to 1876. It’s part of the museum’s core exhibit, “Audacious Freedom: African Americans in Philadelphia 1776-1876” — the first 100 years following the birth of our nation. Its interactive timeline brings history to life, including the stories of 10 trailblazers such as Octavius Catto and Frances Ellen Watkins Harper, one of the first African American women to be published in the United States.

The second Saturday of every month is Family Fun Day, featuring special activities, storytellers, music, workshops and other fun happenings that bring history to life in added dimensions.

While Valley Forge National Historical Park is known for the Revolutionary Army’s winter encampment from 1777 to 1778, many visitors may not know this force included more than 700 Patriots of African descent. In total, 5,000 to 6,000 enslaved people fought for our country’s independence from the British by serving in the Patriot Army. In fact, many Black soldiers fought in integrated military units  something that did not happen again until the Korean War, 170 years later.

Today’s visitors can honor these brave soldiers and reflect on their experiences at the park’s Patriots of African Descent Monument. The granite and bronze monument, designed by Black artist Cal Massey, depicts three soldiers with doves of peace in the background, anchored by laurel leaves at the bottom to symbolize victory and honor.

This piece first appeared in the February 2022 issue of MetroKids.

5 Places for Winter Ice Skating in the Delaware Valley