Can Medical Marijuana Help Your Child?

Children in Pennsylvania, New Jersey and Delaware who have autism or seizures can take medical marijuana if a doctor approves.

Kiera, an 11-year-old Glenside, PA girl who suffers from seizures, is sleeping much better now. So too is Grace, an eight-year-old with autism, from Harleysville, PA.

Both children are using medical marijuana for their medical conditions. After three weeks, their parents believe the treatment is helping.

“The biggest change is she sleeps through the night. She used to get up at 3 or 4 in the morning,” says Grace’s mom, Kim.  “She’s also putting sentences together better.”

Kiera’s mom, Vicki, says her daughter, in addition to sleeping more soundly, has improved focus. Best of all, a recent electroencephalography (EEG) showed Kiera hadn’t had any seizures, where she previously had up to 30 a day, even when taking other medications. “It was huge,” Vicki says of the EEG result for Kiera, who has a rare genetic condition that can cause a host of developmental problems, including seizures.

“I was very hesitant about it,” Vicki says of medical marijuana, but she researched and decided to try it because other medications didn’t offer much relief and had potentially serious side effects, including one with a black-box warning that it could cause death.  “The side effects were worse than the seizures,” she says.

Pennsylvania, New Jersey and Delaware all started medical-marijuana programs for people, including children, with certain medical conditions. While the list varies slightly from state to state, all three allow it to be used to treat seizures. In Pennsylvania, autism is one of the covered conditions. In New Jersey, autism must be accompanied by anxiety, while in Delaware, a child with autism needs to exhibit aggressive behavior to qualify.

The National Institute on Drug Abuse, a federal agency, says that marijuana contains chemicals that appear to reduce inflammation and have other medicinal properties, but it also warns that it carries the risk of addiction, particularly in children.

In order to buy medical marijuana for a child in Pennsylvania, the patient must first visit a doctor who has been certified by the state as a participant in the program. If the doctor confirms that the child has one of 21 medical conditions approved for the drug, a parent, guardian or designated caregiver, after a criminal background check, gets a card that can be taken to a marijuana dispensary. The dispensaries, the first of which opened in Pennsylvania in February 2018, are required to have a doctor or pharmacist on duty to consult with customers. If they have multiple locations, they can have a physician’s assistant or registered nurse practitioner at the additional locations. 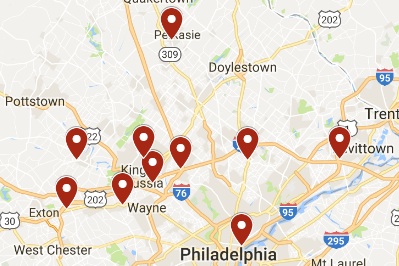 “The dispensaries are much like pharmacies, a doctor will certify the patient for medical marijuana, and the patient goes to the dispensary and gets the product they think will work the best for their medical condition,” said Nate Wardle, a spokesman for the Pennsylvania Department of Health. “Parents/caregivers should consult with their practitioner about the form of medical marijuana that would be best for their child. Parents/caregivers can also consult with the medical professional at the dispensary.”

There are two forms of medical marijuana: the THC (tetrahydrocannabinol) form, which can cause a “high” and the CBD (cannabinoid) form, which does not. They come in pills, oils, topical forms, such as patches or ointments, vapors and liquids designed to treat various serious illnesses, according to the state’s Office of Medical Marijuana.

In Southeastern Pennsylvania, TerraVida Holistic Centers has dispensaries in Abington, Malvern and Sellersville. Chris Visco, TerraVida president and COO, says she started to research the use of medical marijuana after seeing members of her family suffer from cancer.  “I just stayed on top of it,” she says. Helping people relieve their pain, especially children, has been “so rewarding, more than I can ever imagine.”

With her business partner, Deena Birnbaum, she opened the centers as soon as state law allowed. Business has been brisk, she says, and she foresees the need for about 15 centers in the region to accommodate customers. There are 46 statewide.

In New Jersey, there are Alternative Treatment Centers in Bellmawr, Cranbury, Egg Harbor, Montclair, Secaucus, and Woodbridge with one planned in Secaucus. A physician registered with the program most certify that the patient has one of the qualified conditions.

In Delaware, there are dispensaries, called Compassion Centers, in Lewes, Newark, Smyrna, and Wilmington. Doctors must also certify that the patient has one of the qualified medical conditions.

Pennsylvania Department of Health spokesperson April Hutcheson said in 2018 that approximately 300 children were approved to receive medical marijuana out of the 7,200 cards that have been issued. Approximately 26,000 people had applied to the program as of March 2018.

TerraVida centers provided medical marijuana products for about 1,850 people in 2018, 10 percent of whom have been children under 18. “We see more autistic children than any other reason for children,” Visco said.

According to the New Jersey Department of Health, half of 1 percent of the 18,700 patients using medical marijuana in the state are minors. The top conditions for which they are using it are seizures, post-traumatic stress disorder and inflammatory bowel disease.

In Delaware, 21 juveniles’ caregivers had signed up to receive medical marijuana as of March 2018. There were 4,546 adult patients on the registry at that time. The most common reason for which caregivers sought treatment for juveniles is seizures.

While marijuana is a natural substance, it still poses risks for dependency, the NIDA cautions. It says that “people who begin using marijuana before the age of 18 are four to seven times more likely to develop a marijuana use disorder than adults,” which is a dependency on the drug that can lead to addiction in some people.

Visco disputes that marijuana could be addictive, saying most children take the CBD version of medical marijuana “which has zero psychoactive properties.”

School districts continue to warn students about the dangers of dependency-forming drugs, including marijuana, but some students are now going to class while taking medical marijuana.

A parent considering medical marijuana for a child needs to weigh the risks versus the benefits in, Hutcheson said.  “It’s a tool but not the only tool.”

For Vicki, whose daughter Kiera has developmental delays and suffered from seizures for years, the benefits outweigh the risk. “If her being addicted to marijuana was the worst thing I had to worry about, it would be a blessing,” she says.

Medical conditions that qualify for medical marijuana in PA

These are the medical conditions eligible for medical marijuana in PA:

Medical conditions that qualify for medical marijuana in NJ

If the patient is resistant/intolerant to conventional therapy:

If severe or chronic pain, severe nausea or vomiting, cachexia or wasting syndrome from the condition or treatment:

Medical conditions that qualify for medical marijuana in DE

A chronic or debilitating disease or medical condition or its treatment that produces one or more of the following;