Psychologists say that resilience is a key indicator of future well-being.

Kenneth Ginsburg, MD, a professor of pediatrics at the University of Pennsylvania and author of Building Resilience in Children and Teens: Giving Kids Roots and Wings, defines resilience as “the capacity to rise above difficult circumstances, allowing our children to exist in this less-than-perfect world, while moving forward with optimism and confidence.” Under pressure to succeed academically, socially, in extracurricular activities and with social media, children need to be resilient.

Freedom to succeed and fail

To build resilience, parents need to practice letting go — and summer camps, which create communities where children are supported by nurturing adults, are well-positioned to help kids of any age develop resilience skills.

“A traditional summer camp gives campers the freedom to encounter success and failure on their own, in a safe environment where they can learn from their experiences,” says Brian Kuser, an elementary school teacher and summer camp director for Fiddlehead Summer Day Camp at Fernbrook Farms Education Center, a day camp for children ages 6-11 in Bordentown, NJ.

“Unlike school, where the structure is geared towards timely success with a teacher correcting mistakes, camp purposely provides the time and space for children to make mistakes, try new methods and learn for themselves what works best,” says Kuser. 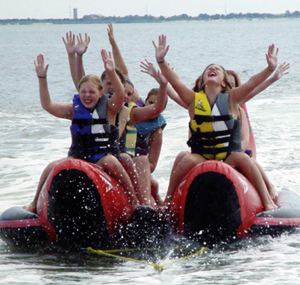 Tom O’Neill, director of Golden Slipper Camp, a not-for-profit, coed overnight camp in the Pocono Mountains for ages 7-15, believes that camp builds resilience because it’s a place where “campers learn to trust adults other than their parents and take risks with developing new friendships. By becoming part of the camp family they gain a sense of belonging and community outside of their home.”

“Camps immunize children against adversity by giving them manageable amounts of stress and the supports they need to learn how to cope effectively. The better a child succeeds at finding the experiences that bolster his well-being, the better he will be able to cope with life stressors,” according to Michael Ungar, PhD, co-director of Dalhousie University’s Resilience Research Centre in Halifax, Nova Scotia.

At International Sports Camp, a coed overnight camp for ages 8-17 in Stroudsburg, PA, campers are encouraged to try new activities that may be out of their comfort zone.

International Sports Camp director Mark Major, says, “We create an atmosphere that is conducive to kids challenging themselves, and we encourage the staff to create a culture where kids take care of each other and can learn from their mistakes rather than being ostracized for them. At camp, failure is acceptable. We teach all staff to take the word failure out of their vocabulary and replace it with feedback.” 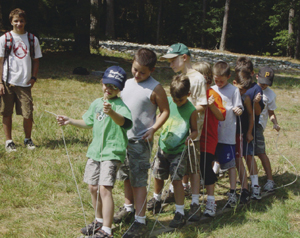 ‘You are an individual’

“We focus on bullying and how when you come to camp you are an individual, special, and will always be accepted for who you are. This aspect of resilience manifests itself in the idea that campers are members of a ‘family’ and you rely on one another when times are difficult or you find yourself in an uncomfortable position,” says Walt LaFontaine, director of Camp Arrowhead, a day and overnight camp program in Lewes, DE operated by the Episcopal Diocese of Delaware.

“Our staff model is that camp is a ‘No D Zone’: no dissing, diminishing, demeaning, discouraging,” says Major, “but it’s our campers who came up with the ‘3 Cs’: If a kid is caught dissing someone, that kid has to take a knee and pay three genuine compliments to the person who was dissed.”

O’Neill adds, “In their everyday camp routines, kids experience moments which require them to build fortitude, patience and strength. Experiences such as adjusting to change, making decisions on their own, and taking chances both physically and emotionally help campers to experience resilience. Children are exploring and learning different coping mechanisms, which will enable them to be resilient not only at camp but in life.”