Research shows that spending time in nature may improve children’s attention spans, relieve stress, foster creativity and increase fitness levels. Yet the average child spends more than six hours on electronic devices each day and spends half as much time outside as the average child in the 1980s, according to recent studies. How can summer camps that emphasize nature compete with fast-paced video games and the constant stimulation of modern technology?

At Down on the Farm Summer Camp at Kranz Hill Farm in Newark, DE, director Melanie Hiner says, “Campers are not just shown things. They actually get to try them.” She explains that, for many kids, farming is completely alien. They don’t know where their food comes from. At the camp, though, they don’t just see pictures of how it’s done. They feed the farm animals, gather eggs, harvest crops, forage for food and plant seeds.

Campers learn about the history and science of cultivation and then apply it. They try ancient methods of seeding and use modern tools to see how techniques have improved. They build tools themselves, such as shadoufs, devices invented by the ancient Egyptians for moving water from lower to higher ground.

At Primitive Pursuits Summer Camps in Ithaca, NY, program director John Chilkotowsky says of their overnight camps for older children and teens, “We replace electronics with making real things. We exchange technology for something that requires patience. We can buy a lighter or a bow, but there is real excitement the first time kids make a fire by themselves without a lighter or build a bow that can actually shoot arrows. They’re learning what our ancestors used. This was the technology of their day. This is how we got here.”

After a morning of learning about nature at Kranz Hill Farm, campers spend the afternoon exploring how nature influences art, music and the written word. For example, on a day that they’ve learned about soil, the kids might sculpt art projects with clay.

While many camps avoid electronics, some camps connect modern technology with their activities. Denise Peters, director of education at Woodford Cedar Run Wildlife Refuge in Medford, NJ, says, “We ask that phones and tablets are left at home, but we incorporate technology on occasion.” For instance, the children use GPS units to help them find geocaches, small containers that people leave hidden at outdoor locations marked by coordinates that are then shared on various websites. 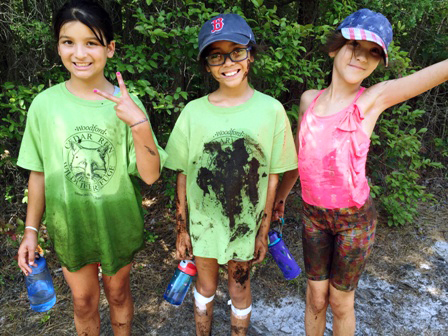 Children may gravitate toward some parts of nature over others. For that reason, many camps allow children to choose their activities.
​
Hiner says if a camper is particularly drawn to animals, she might spend her afternoon with the animals, rather than doing the art project. Another child who really likes building things might spend more time constructing a project with bamboo.
​
Chilkotowsky says he and the other camp staff always remain open to stepping back from their curriculum to focus more attention on something the campers find exciting or to switch gears if a great blue heron decides to land during a lesson on a building fire.

“We have had kids who are skeptical about the outdoors,” says Mary K. Miluski, executive director of The School in Rose Valley’s Summer Camp in Rose Valley, PA, which offers a wide variety of activities, including many nature-based ones. Some kids don’t like to get dirty. Other kids hate bugs or are afraid of animals. Miluski explains that sometimes just having those kids see other kids’ excitement around these things makes them more open to facing their fears and checking out the fun.
​
Chilkotowsky says the instructors at Primitive Pursuits don’t pressure the kids who are fearful but simply model how they interact with nature. They also play games where kids often will overcome a fear of getting dirty or being near spiders because they don’t want to give away their hiding place and are willing to get over their fears for a chance to win the game. He explains that creating a culture where campers immerse themselves in nature and learn real survival skills tends tend to develop their confidence and self-reliance: “The kids learn that nature is their home.”

Susan Stopper is a frequent contributor to MetroKids.