What were considered new trends a few years ago have now become commonplace in residential summer camps.

Most camps maintain strong anti-bullying policies. Camps routinely serve up healthier food options to combat the overweight/obesity problem. Many camps stay in touch with their communities on Facebook, Twitter and other social media. Some even have a YouTube channel or produce weekly DVDs for parents. Here’s a recap of these 21st century camp practices.

At Camp Dark Waters, a Medford, NJ, residential camp for ages 7-16 founded on Quaker principles, campers adhere to a statement of rights.

• I have the right to be happy and to be treated with kindness. This means that no one will laugh at me, ignore me or hurt my feelings.

• I have the right to be myself. This means that no one will treat me unfairly because I am fat or thin, fast or slow, strong or weak, boy or girl. I am different because I am myself.

• I have the right to be safe. This means that no one will hit me, kick me, push me or pinch me. I will be free from physical threats.

• I have the right to hear and be heard. This means that no one will yell, scream, or shout and my opinions and desires will be considered in any plans we make.

• I have the right to learn about myself. This means that I will be free to express my feelings and opinions without being interrupted or punished.

Bullying among kids isn’t new, but today’s camps don’t put up with it. Many camps now have a zero-tolerance policy for bullying of all kinds. In 2004, Camp Dark Waters in Medford, NJ introduced Campers Rights, which entitles each camper to an environment free of bullying. At Pine Forest Camp in the Poconos and Camp Orchard Hill west of Scranton, PA, bullying campers are warned, and if that fails, sent home.

Camp Orchard Hill is “serving nutritious meals, limitHing portion size and limiting the amount of snacks consumed between meals, in order to combat the overweight/obesity problem that is prevalent in the country,” says director Jim Payne.

Camps routinely use Facebook, Twitter and other social media to update campers and parents, to maintain connections and to recruit new campers. “We update our Facebook page regularly with photos, notes and 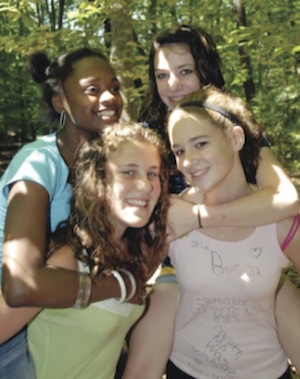 Payne says at Camp Orchard Hill, counselors are encouraged to stay in contact with their campers via Facebook. The camp also uses Facebook to attract new campers.

“We hope by staying in touch in a positive way with our current families and alumni that the positive word will spread and prospective families will also stay in touch with our social networking efforts,” says Pine Forest’s Silverberg Chadwin.

Memories are made at camps, and some camps are documenting them. Camp Green Lane in Green Lane, PA and Camp Orchard Hill have created YouTube channels and have a videographer that records for weekly DVDs.

Tasia Jones is a MetroKids intern and communications student at Drexel University.