If your child is terrified of monsters, Hey, That’s My Monster! (Flashlight Press; $13.33; ages 5-8) will help ease her fears. You can skip the spooky ghost stories that are popular this season and opt for this book, which puts a friendly spin on the beastly creatures.

The monster under Ethan’s bed actually helps him get to sleep by forcing him under the covers with playful threats of tickling his toes. But one night before bedtime, Ethan peeks under his bed to find a note in lieu of his favorite furry monster.

Desperate for some shuteye, Ethan searches his house for Gabe to find him lurking under his little sister’s bed. Ethan knows that Emma bounces off the walls at bedtime, but Gabe is his monster! So, Ethan makes a deal with Gabe that if he can get Emma to bed on his own, Gabe has to come back home. Gabe says he will give Ethan three chances to get Emma tucked in. 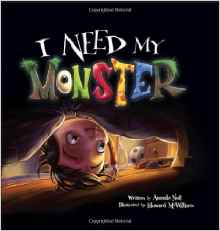 With a swift knock on the floor, Ethan tricks Emma into summoning three different monsters to try and scare her to sleep. But Emma finds each monster sillier than the last, giggling and dancing and singing through the night. Will Gabe get his monster back?

Amanda Noll’s lighthearted words and silly monsters allow you to employ your funniest voices for your little one. It’s hard even for a kid to find a monster with eight stuffy noses frightful! Howard McWilliam’s colorful illustrations also help to bring the story to life.

It might not be a bad idea to purchase the prequel I Need My Monster (Flashlight Press; $12.60; ages 5-8) but Hey, That’s My Monster! can definitely stand alone to provide pre-bedtime entertainment for your child. 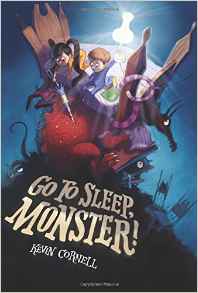 In this tale, Anna tries to tell her brother George that it’s time to go to sleep, but he refuses to turn out the light because there’s a monster hiding under his bed. Big sister Anna scolds the monster for his antics and tells him to rest his head, too!

What follows is a series of revelations that more and more monsters dwell in the dark of the night, each one scared of the next. When George and Anna and their gaggle of quivering creatures brave “the center-most center of the center of the earth” to find the final monster, he too is shaking in his boots.

You'll have to read the book to discover what that monster is afraid of!

Kevin Cornell’s adorable words and pictures remind us that everyone is afraid of something. Go to Sleep, Monster! is a quick read with a huge lesson to share. 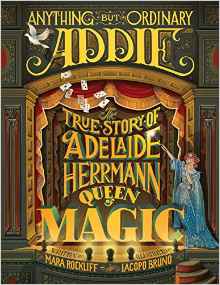 If monsters are still too scary, pick up Anything but Ordinary Addie: The True Story of Adelaide Herrmann Queen of Magic (Candlewick Press; $13.79; ages 6-9). This enchanting story will bring some history into your bedtime routine.

Instead of being remembered as revolutionary and regal, Adelaide Herrmann was often dismissed as the wife and assistant to magician Herrmann the Great. But Mara Rockliff, with the help of magician Margaret Steele and others, brings the true tale of this remarkable woman to life in Anything but Ordinary Addie.

From childhood, Addie did things that were unheard of for women of her time and cared very little about what others thought of her actions. She wore eccentric costumes, performed on stages and took up a career as a prima ballerina before diving into the world of magic with her husband, Alexander. But Addie was far from an assistant. She was actually given the nickname “Queen of Magic” for taking over her husband’s show after his death and successfully completing the bullet-catching trick that had left many a magician dead. Nothing was impossible for the extraordinary Adelaide.

If you’re looking for a story that will inspire and amaze, Anything but Ordinary Addie is worth a read. Iacopo Bruno’s charming illustrations add to this biographical bedtime story.

Ariana Annunziato is a communications major at Drexel University and a co-op intern with MetroKids.