The sooner a child gets treatment, the better the outcome is likely to be.

When one in 59 children is diagnosed with an autism spectrum disorder (ASD), many parents fear their child may be that one.

Yet there is a strong reason to face the fear and be vigilant for autism’s early symptoms. “Autism is a terrifying thought to parents, but the earlier a child with autism is identified and gets into treatment, the better the outcome,” says Susan Levy, MD, director of the Regional Autism Center at The Children’s Hospital of Philadelphia.

ASDs are developmental disabilities that affect communication, social interactions and behavior. Rhonda Walter, MD, chief of the Division of Developmental Medicine at Nemours/Alfred I. DuPont Hospital for Children in Wilmington, DE, explains that the earlier children are identified and receive treatment, the sooner they will often gain language and social skills, alleviating frustration and increasing their chances for further improvement.

The American Academy of Pediatrics recommends pediatricians screen for autism at a child’s 18- and 24-month well visits, but warning signs can appear earlier. Here’s what to look for.

The Surfacing of Autism

Autism can surface anywhere from infancy to age two or later, says Dr. Levy. In some cases, parents of autistic children say they knew something was amiss from early infancy. For instance, the baby may not have liked to be held or didn’t look or smile at his mother.

But autism can also appear in the form of regression, when a child appears to be developing normally and then loses skills, often at around 18 months. In other cases, autism appears gradually, becoming apparent by age two when the child may not be social and has trouble with language. 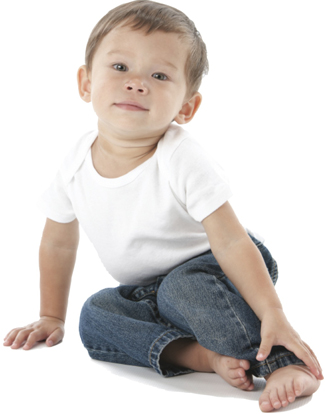 Lisa Alberts, director of the Autism Center of Excellence at the Center for Neurological and Neurodevelopmental Health in Gibbsboro, NJ, explains that autism has a wide range of symptoms and behaviors, but researchers have identified five red flags that occur in a significant portion of kids with autism.

“If your child has any one of these symptoms, you should have your child evaluated,” says Alberts.

This video demonstrating early autism indicators is part of "Every Day Counts, Everyone Can Help," a video series for parents from educational publisher Rethink Autism.
For the full series, visit www.rethinkautism.com.

However, children with autism can have widely varied symptoms. Here some other possible signs of autism.

If you think your child may be exhibiting signs of autism, talk to your pediatrician about an evaluation. Then follow up with a pediatric neurologist or a developmental pediatrician.

“Don’t underestimate the value of bringing clips of your child’s behaviors — both strengths and weaknesses to the team assessing your child,” she says.

“Parents should go with their gut,” says Dr. Walter. “They may think they’re overreacting, but it’s better to err having your child screened than not.”

• First Signs, a national non-profit dedicated to education about the early warning signs of autism and related disorders, www.firstsigns.org

• M-CHAT, a developmental screening tool for toddlers intended for health professionals. Results should be discussed with your doctor, www.m-chat.org