The arts might express civilization’s highest achievements, but for kids — and their parents — they translate into fun and new ways to see the world, a great blend of education and recreation.

Though done alphabetically, Lights on Broadway by Harriet Ziefert with wild, gaudy, Broadway-friendly illustrations by Elliot Kreloff (Blue Apple/ Chronicle, $19.99, all ages), is for youngsters who already have some interest in theater.

The alphabet is an excuse to cover a wide variety of subjects such as “fourth wall” — the illusion that the actors are in a self-contained world broken only when they speak directly to the audience and break the fourth wall.

The book celebrates theater by making it more accessible through vocabulary and the sheer exuberance of its prose, illustrations, and through actor Brian Stokes Mitchell’s CD tucked in the back with a song for his son on why an actor acts and sings. 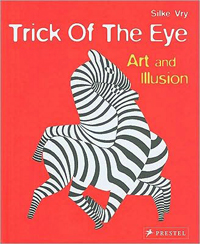 Besides its engaging and eye-opening Children Should Know series of art books in categories such as women artists, modern artists and sculptures, the publisher Prestel engages everyone in its book, Trick of the Eye: Art and Illusion by Silke Vry ($14,95, all ages).

The theme, of course, lends itself to artists such as Magritte, Escher and Arcimboldo, all of whom are well represented here with their constant tricks of the eye. Magritte shows a man looking in a mirror with the back of his head in the mirror. Escher’s drawings mix up front and back and up and down in complicated drawings, while Arcimboldo made heads out of vegetables.

But the author, who lives in Germany, explores many other European artists for the illusions they portray, including Mona Lisa’s eyes that seem to follow the viewer and the complex perspective employed by the Renaissance Dutch masters. Besides being fun, the art is an inspiration to aspiring artists, as the author herself encourages with tips and tests to make the art interactive with the viewer.