Animals Inside Out & a New World for Elmo

New exhibits at the Franklin Institute

MetroKids recently attended the opening of two new Franklin Institute exhibits. Here’s what we encountered during our journey.

Body Worlds: Animals Inside Out 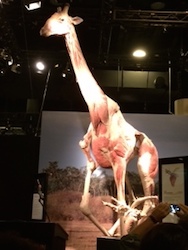 As we walked through this creepy yet fascinating exhibit, we got a view of the innermost workings of 100+ real animal specimens, including the giraffe and squid pictured here. Animals Inside Out delivers on the promise of its name, displaying the musculature, systems, organs and even some body slices of a variety of mammals, birds and sea life. (A prominent sign avers that no animals were harmed or killed in the assembly of this somewhat gruesome assemblage.) Longtime FI visitors will know that this edition of Body Worlds is the sequel to a 2006 exhibition, which featured the similar “plastination” of real human bodies. 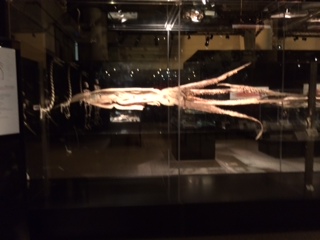 Kids who are science-minded or considering a medical or veterinary career will dig this opportunity to delve deep into anatomy, as will those who relish the gross-out factor. The squeamish, however, should stay far away — the graphic nature of what goes on underneath the skin was a bit much for the MK team to take in. (There's a reason we didn't go to med school!) Example: We think it was the ostrich whose fluffy innards were a shocking, almost-neon red; we couldn't muster the stomach needed to get close enough to the glass case to read the plaque.

Next page: We can tell you how to get to Sesame Street!

Luckily for us, the entry to a friendly, familiar world was just steps away. Sesame Street Presents: The Body also lets visitors explore what happens underneath the skin, though in this case, it's done in an interactive, character-driven — and corpse-free — way, designed to appeal to the preschoolers who already spend time with Elmo, Grover, Ernie and the rest of the Sesame Street gang. Take a walk down this street, and you'll encounter three learning zones: Your Insides, Your Outsides and Staying Healthy. 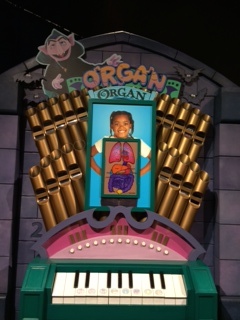 There are lots of goodies in the Your Insides section. At Count von Count's “Organ Organ” (right), kids press a key and hear a cute song about their organs, where they are located and how they work — love the Count's accent when he sings about the pancreas. 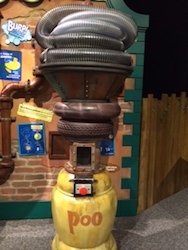 Continue on to the right and have an interesting run-in at the “Digestion with Oscar” station, where the green grouch gives kids a preview of what happens during the three-step digestion process, from the mouth to the stomach to, well, the bathroom. What kid isn't going to love the "Poo" station (pictured at left)?

Another interactive highlight: At Mr. Hooper’s Store in the Staying Healthy zone, kids learn which kinds of foods are beneficial to their bodies as they scan healthy items on a grocery list. 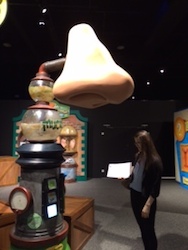 The biggest draw, though, is obviously Oscar’s Sneeze Machine (at right). Stand under the giant nose, pick your allergen or irritant, pull a lever and see what happens. (Hint: Gesundheit!)

Sesame Street songs play throughout the exhibit, and there's plenty of space to roam, plus an Elmo's World video alcove for kids who need some time to chill. While we think it's a stretch for the FI to recommend this exhibit for kids as old as 8 — most 3rd graders will have moved well on from Sesame Street and will likely want to spend as much time as possible in the Franklin's remarkable (and still new) Your Brain extravaganza — this a fantastic place for preschoolers from 2-5 to get an early understanding of how their bodies work. 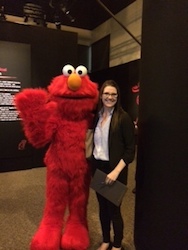 Allison Kenney, a Drexel University student and MetroKids co-op intern, had a close encounter with Elmo when she checked out these new FI exhibits.