Advocating for Special Needs and Disabilities

In the beginning . . . there was IDEA 1975. I’ve blogged about this before, but in a nutshell, IDEA 1975 was never a fully funded mandate. Our government came up with a whole bunch of stuff that the schools were “supposed” to do, but they were never given the money to do it properly. Sure, some funding increased. It was up and down and we were hobbling along, doing OK. By we, I mean special ed and society as a whole.

But now, in my opinion, we are at a critical breakpoint in this process, and here’s why.

Number of students and need increased . . . funding decreases. Yes, everyone is doing more with less. 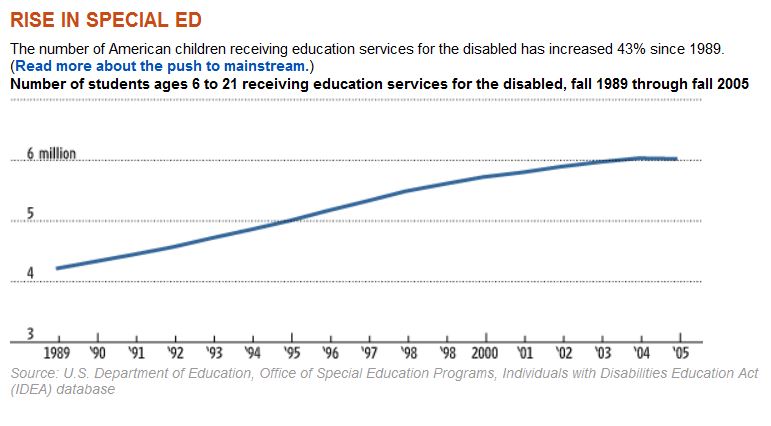 Now, there’s one more piece in the puzzle – the reauthorization of ESEA. ESEA (known as HR 5 when it was passed in the Pennsylvania House) is currently being discussed in both the House and the Senate. As a parent and advocate, I prefer the Senate (S 1094) version. The House version takes away too much accountability. It narrowly passed, and fans of it will state that it helps undo some of the too-tight restrictions from NCLB. I disagree – it’s too much. But let’s think this through . . .

Our kids already lack all the services they need. Less money to provide those services, less accountability in providing those services . . . why would we think our kids would be OK in this scenario?

I don’t know about you, but for me, overall this is just a recipe for a disaster. The only analogy I can think of is if you are a homeowner with a leaky roof. Initially you have the money to fix it, but the leak isn’t that bad, you have credit cards and other bills to pay . . . so you patch it. And you patch it and you patch it. A few years go by . . . now all of a sudden you are unemployed, can’t find work. You have credit card debt so you can’t put it on the credit card. You can’t sell the house because no one will buy it with the leaky roof. And now the leaky roof is so bad you can no longer ignore it. Ignore it and your roof will cave in.

Is the sky falling? I don’t know. But I know we can’t continue like this, all kids deserve better. We need a new roof, we can’t keep patching this one and hoping we get by.