ADHD in Kids on the Rise

What parents should know about the dramatic ADHD diagnosis increase

The numbers are alarming: Attention deficit hyperactivity disorder (ADHD) diagnoses in the United States have climbed 53 percent over the past decade. This figure, crunched in a recent New York Times analysis of data from the Centers for Disease Control and Prevention, incorporates an estimated 6.4 million kids from 4 to 17 who grapple with ADHD, a condition characterized by difficulties focusing and controlling behavior.

Break the stats down further, and you’ll find that nearly one in five high school-age boys and 11 percent of school-age students have received an ADHD diagnosis. The rapidly rising figures are leading many to ask what’s causing the surge.

The Medication Debate
Nearly two-thirds of children with a current ADHD diagnosis receive prescriptions for stimulants like Ritalin and Adderall, according to the New York Times report. Medication is frequently used to treat children with ADHD, a concern for some parents.

“Generally speaking, these medications are safe,” says Mautone. “They can have side effects such as insomnia and appetite suppression,
which is why they should be monitored closely by a physician.”

While research heavily supports the effectiveness of medication for treating ADHD, it is not the only course of treatment. Mautone says research has also shown behavioral parent training to be highly effective in treating children with ADHD, either alone or in conjunction with medication. This line of treatment teaches parents, teachers and other adults in the child’s world behavioral interventions to promote positive behavior.

Mautone explains that there are families who put effort into diet changes, herbal remedies and other methods of treatment that research has not yet shown to be effective. “Before putting something in your child’s body or removing something from his diet,” she advises, “consult with your pediatrician to make sure this will support healthy child development.”

“Awareness is probably the biggest reason for the increase in diagnoses,” says Jennifer Mautone, PhD, a psychologist at the Children’s Hospital of Philadelphia’s Center for Management of ADHD. “We’ve gotten better at identifying kids with legitimate disabilities who need support.”

Jean Buzzard, coordinator of the Children and Adults with Attention Deficit Disorder (CHADD) chapter in Newark, DE and mother of a son with ADHD, explains that as ADHD has become more widely known, some parents have recognized the condition in themselves. When they see their children exhibit similar behaviors, they schedule evaluations so their kids get help dealing with ADHD in a way they never did.

That being said, “There are some legitimate concerns about overdiagnosis of ADHD,” asserts Mautone, explaining that children who may be borderline can sometimes end up with a full-blown diagnosis because of educator and parental concern.

Teachers don’t have time to waste keeping disruptive students in line, says Charles Scott, MD, FAAP, a pediatrician at Advocare Medford Pediatrics and past president of the New Jersey chapter of the American Academy of Pediatrics. Pressure from time-strapped teachers and frazzled parents can sometimes result in a hasty ADHD diagnosis and a prescription for medication.

For more information and links to local ADHD resources and support groups in your area, log on to the Children and Adults with Attention Deficit Disorder (CHADD) website.

Read "Parents Offer ADHD Advice" to get the scoop on how others deal with the disorder in their homes.

There is no blood test or other definitive test for ADHD; instead, a pediatrician or mental health specialist determines whether a diagnosis is warranted by studying a child and gathering information about his behavior from parents, teachers and other adults who know him well. While there is an attempt to be objective with different scales and evaluation tools, Scott explains that the assessment is still somewhat subjective.

Other medical concerns can be mistaken for ADHD, too. Children with learning disabilities, psychiatric issues or undetected hearing or vision problems can exhibit symptoms similar to those of ADHD, making it imperative that a child have a thorough evaluation to rule out other conditions.

Finally, sometimes children will receive an ADHD diagnosis because their insurance companies won’t cover evaluations and care unless there is a diagnosis, says Mautone. 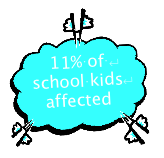 In light of the new statistics, what should a wary parent do if you believe your child has been misdiagnosed with ADHD? According to Scott, first talk with your child’s teacher and design a school/home behavior modification plan stressing a consistent approach of positive reinforcement to promote appropriate behavior. If problems persist, request an evaluation for learning disabilities; schools are required to provide testing for learning disabilities free of charge.

If you’re worried that your child may suffer from another physical or psychiatric problem, speak with your pediatrician or a mental health specialist.

Susan Stopper is a freelance writer.