Feb. 14 may automatically conjure Valentine’s Day, but for Chinese around the world, this year it also ushers in the Year of the Tiger.

How do we know which year it is? Mary Man-Kong’s Lucky New Year! (Golden Books, $9.99, ages 4-8) starts with a moveable wheel that matches dates with animals in a book that goes on helpfully to explain the Chinese New Year rituals, especially the parts for kids.

These include getting “lucky money,” hearing firecrackers to “scare away bad feelings and evil spirits” and the dragon dance to bring “wisdom, wealth, and happiness.” Chi Chung’s elaborate depictions of the rituals include flaps, tabs and a final pop-up dragon to bring them alive and remain memorable until next year, which will be the Year of the Ox.

And how did the animal years get chosen? Marie Sellier, Catherine Louis and Wang Fei retell how the Great Emperor of Heaven invited all the animals in creation to visit him in What the Rat Told Me: A Legend of the Chinese Zodiac (NorthSouth, $16.95, ages 4-8).

The rat not only cunningly forgot to awaken the cat for the trip to the emperor’s mountain, but also leaped ahead of the ox to claim the first year. Such antics might be frowned on in some cultures, but the recurring theme of winning at all costs starts here, where the emperor approved of the rat’s tricks to get to the front of the line.

The book recounts the emperor’s choice for each animal’s place in simple, elegant language matched by the elegant, schematized drawings in black, white and red. 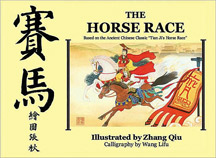 Cunning is also the subject of The Horse Race: Based on the Ancient Chinese Classic “Tian Ji’s Horse Race,” illustrated by Zhang Qiu with calligraphy by Wang Lifu (J.M.Entrikin, $16.95, ages 4-8).

Very colorful and evocative ink-and-watercolor drawings of ancient China accompany another clever part of the book — it is written in English, with English transliteration on top of the Chinese calligraphy to help young people match pronunciation with meaning and recognition of Chinese words. 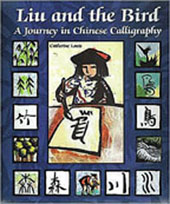 In Liu and the Bird: A Journey in Chinese Calligraphy (NorthSouth, $6.95, ages 4-8), Catherine Louis writes and illustrates the association between words and their Chinese pictograms. She shows in three steps how an object like a feather, star or field can be transformed into a word with only a vague connection to its original meaning.

Her linotype and colored-paper illustrations make strong images to help anyone inspired to learn Chinese in the Year of the Tiger.